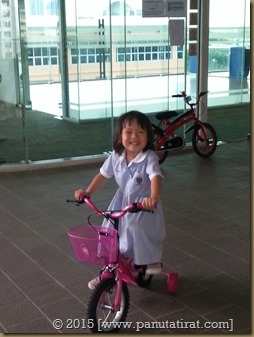 Last week suddenly out of the blue a photo popped up on my Line messenger, and it brought a huge smile and puzzling frown at the same time… lol. It was a photo of Mar on a blinding pink bike, lol.

At first I thought Mar had borrowed it from someone else, your aunt had mentioned that she was going to get you another scooter (as the old one lost its front wheel completely, probably from trying to break the sound barrier or something, lol).

According to your aunt, the hunt for a scooter was going really well, that was until Mar laid her eyes on the pink bike… like a cobra being mesmerised by a song, I am sure Mar was hooked lined and sinkered even before she saw the princess cartoon stickers on the bike, and after seeing the princess stickers, it would have taken ten Hulks to tear her away from the bike, haa haa haa haa haa haa, and the Hulk would loose.

So, Mar has a new bike, and the first time I saw her on it, it scared the life out of me… I thought she was fast on a scooter, but on this bike the land speed record seemed very plausible, lol.

Previous Sunday was raining cats and dogs and you two were itching to show me how fast you can ride… so off we went to the first floor, as the pool was closed we had the whole floor to ourselves, which definitely wasn’t a good thing, haa haa haa, just more space for you two to try to break the 0 – 100 Km/h record. 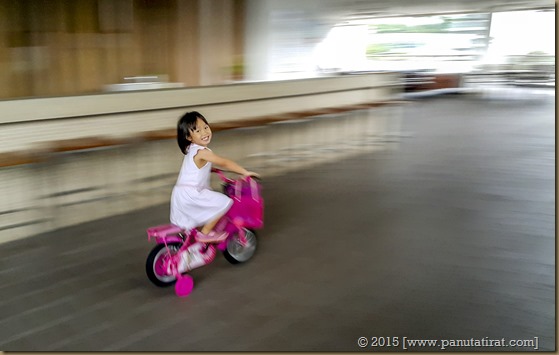 I’d just came back from a business trip to Ho Chi Minh, and for the first time I’d decided to rely on mobile phone camera only, with a bit of work the photos were quite decent, so on that Sunday ride I took nothing but the Note 4, of course there were more misses than hits, but I was quite happy with the results. At the end of the day it wasn’t about getting the best photo, but literally to capture the moment.

You two were riding in circle, then when you two were out of my view there was a moment of silence, it was like someone had push the mute button. A ‘pause’ is never good, you two were up to something… often when you two go quiet even Spectre would have been scared. Suddenly this is what I saw.