Sorry baby, it has been a while since my last post, there are so many things to write and post but not enough time :-)

I promise to catch up on the posts, but first of all I have to mention this to you, it is a weary time to be living in Bangkok at the moment, on the 17th of August a bomb went off in one of the most well known tourist destination in Bangkok (especially popular with tourists coming from the Asian countries), Erawan Shrine at Ratchaprasong Intersection.

Ratchaprasong was also one of the most heated spot during the riot several years back, there is an iconic photo of a statue (huge golden head) with Central World burning in the background. 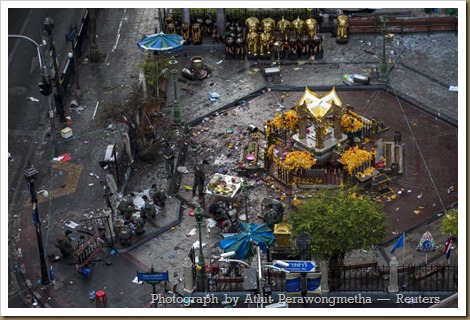 It was devastated to hear that there are someone with such hatred that they would kill innocent people. Many seems to think this bomb was strategically placed at the shrine to destroy Thailand’s tourist industry. There could have been so many more deaths and injured but the bomb exploded on Monday night, luckily due to the date and time, many of the street vendors were not there, and it was off peak for the worshipers.

The second bombing was a hand grenade that was thrown from a bridge onto one of the very busy pier on the Chao Phraya river, what shook me to the core was that, this is the pier that you two and your aunt take almost daily during term time.

After a few weeks, it seems like the police is getting on top of things, (I am not going to go into detail, you can always google it). 2 suspects has been detained, the reason behind the bombing seems to have stemmed from a few months back when the Thai government decided to deport a group (around 100) of Uighurs back to China rather than allowing them to move to Turkey (apparently this was done after verifying their citizenship, China had asked for all 300 back, and even earlier 170 Uighurs were allowed to move on to Turkey, again after verifying their citizenship).

So the bombing was to punish Thailand for sending those Uighurs back to China rather than letting them move to Turkey, do they think this bombing is going to help those remaining Uighurs that are still in Thailand?

For me, you should let people go where they wanted to go, unless they had done something terrible and were just trying to escape from it, for that I have no idea, but again China isn’t gleaming in their human rights department.

Email ThisBlogThis!Share to TwitterShare to FacebookShare to Pinterest
by Panu at 20:38
Labels: Terrible Event, Thailand/BKK