Matt,  how I love our weekly water bottle hunt! There is nothing like coming home in the evening to find out that you have once again misplaced your water bottle, the game is afoot. 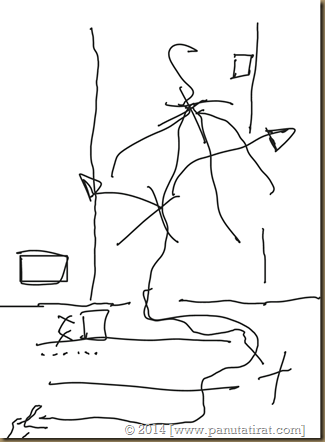 What follows is of course nothing short of a Spanish inquisition, and the first question is always "do you remember the last time you took a swig from the bottle?" and the answer is always consistently "no", follows by "I think..." then a list of a billion places would spew out in non chronological order.

Last night Spanish inquisition went poorly, haa haa haa. I even took out my phone, fired up Evernote and drew out the plan of Matt’s school, it was a mistake to have given you the stylus, lol.

So looking in 3 fields can not be that bad... it was bad, the morning was hot and extremely busy with parents and children arriving before the opening of school, and no it was not there...

Once again it was a blank, there were around ten or so water bottles in the lost and found, but none were tatty enough to be Matt’s, haa haa haa. So where next? With sod’s law in mind, I headed to the place where Matt assured me 100% that he did not leave it there, the music room.

Without even being close to the music room, through the glass pane window I could see one blue water bottle leaning against the window... Once again I came out triumphant, once again I won... well played Matt, GG, lol.