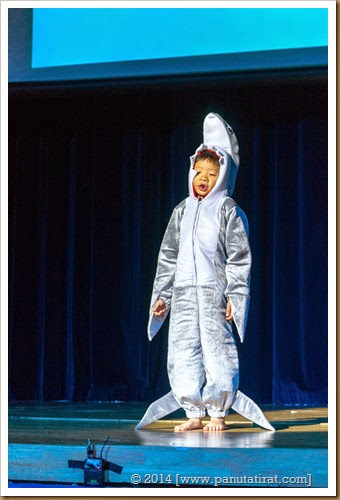 Finally the day came, for the past few weeks or so, before we all go to sleep your mother would play Sid’s song on the stereo, and more than often throughout the day too, haa haa haa, to the extent that Mar knows every words to the song too, lol.

‘Stella the Starfish’, although I have never heard of it before, but it must have been quite a popular play, the whole of Matt’s year was in on the show. By the way the costumes were superb.

The cast included, 2 children (helping Stella), Stella the Starfish (literally the star of the show), a group of Clownfish (to me the best score for the whole show, lol), a group of Lionfish, Terry the Terrible Turtle (fantastic), a group of Rainbowfish (Matt’s class), Sid the Shark (lol) and finally a group of Starfish...

Of course I think you’d absolutely nailed the part, lol (of course I would say that, haa haa haa), last year you were Humpty Dumpty, then you were quite shy and we could tell that you were nervous, but a year on, you were so much more confident (as Sid) to be alone on a stage and sing to a packed house, even I would have a little (huge) jitters.

Back to Sid, you sang beautifully, however I am totally tone deaf, but you mother is the musical one, and she said it was perfect (of course she would say that, haa haa haa). We are so proud of you :-)