What a Sunday (14.09.14), lol, I wasn’t expecting anything different, so as per usual I was just going through the morning’s routine, that was until your Mother popped her head around the door and said, we are having a picnic at Lumphini park! 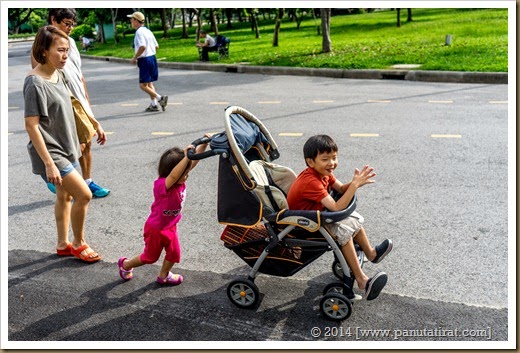 After further investigation, the deal was made the night before with a promise made to you both, lol. So after a quick shower we all jumped into the car and headed off. I never knew that the busiest time for the park was in the morning, all its car parks were jam packed, people in all sizes donning their running shorts and were huffing and puffing away, all far too energetic to the point of annoying... haa haa haa.

Anyway, just imagine me driving into this large car park, hoping, praying for a parking space, and just like seeing an oasis in the desert, sudden I saw this beautiful parking space with this ‘arse’ standing in front of it, blocking it for his friend (who was nowhere to be seen)... really! There was only one thing to do... I drove straight in, rolled down my window and (almost) politely told him that what he was doing was certainly not proper, and proceeded to drive forward...

Anyway, we got the parking space... It was a long walk to the spot that your mother wanted to go to, which was a nice clearing next to the market. Just like a pride of lion (well just the one wife pride, lol) your mother went off hunting (shopping at the market) and my responsibility was to keep you entertain... haa haa haa, it was easier than I had expected, both of you were certainly enjoying the change of scenery. 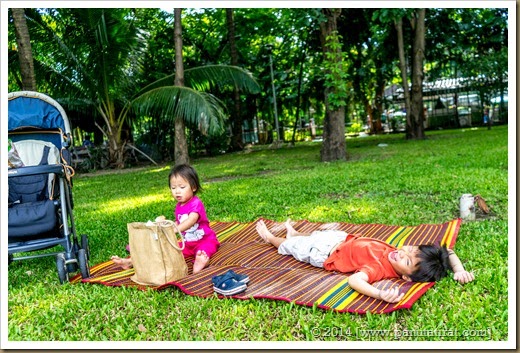 Breakfast was nice and fun, lol, both of you ate well (chicken and rice), even polished off the grapes we brought from home, it had just turned nine when everything was packed and ready to go. People were thinning out, and the boat rental was now opened, but the bread-guy (for feeding the fishes) was no where to be seen, luckily I had anticipated this and bought a loaf from 7/11 on our way here (full marks for me :-)

After about an hour of running around it was time to head home for another quick wash, that was when my mother called. She was asking about lunch, haa haa haa, but breakfast was still right up to my neck so to speak, lol. Anyway, Fuji it was, there is one thing you two should know, your grandfather ‘can eat’ and I mean at the Olympic level, lol.

After a quick wash at home, and after a little quiet time, my parents arrived, so headed off to lunch we went. The timing couldn’t have been better, lunch was fun, lots and lots of laughter and lots and lots of fish, lol. 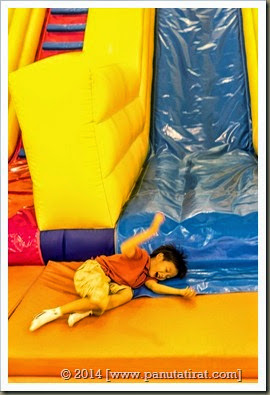 On the drive home both of you went to dreamland, but I think Matt must be enjoying his dreamland a bit more because he didn’t wake up until almost 5, to keep thing fun, we decided to go to Matt’s favourite place, Central Rama 3... But we had to abandon that as soon as we saw the queue of cars waiting to go into the car park. Alternatively we headed to Gateway Ekamai, I needed to check the place out for work, and they have this huge indoor play zone on the very top floor, a win win I think, haa haa haa.

Gateway is going to get a huge revamp, so it was not surprising to see that few top floors were pretty much empty. Luckily the play zone was open, but virtually empty, all the better for us, haa haa haa. Letting you two loose was like letting a couple of dogs loose in the woods, hyper excitement... haa haa haa.

Soon it was supper time, and for once getting you to leave the play zone was as easy as me scoffing down a porkpie. Most of the restaurants in Gateway were Japanese, and for once your mother and I were not up to it, luckily at the basement we’ve found quite a nice food court, so dinner was a simple affair. By the time we were home, both of you were pretty much ran out of steam… lol.