Now that our internet speed is decent-ish, I’d decided to dig up an old project, adding internet capability to the TV.

I’d thought I would have more fun tinkering, but at the end setting this up was easier than watering a plant, lol. In the past I had to run an Ethernet cable from the router to the TV (Panasonic) which was a bit cumbersome and quite unsightly, the worst thing was you two kept yanking the cable down, haa haa haa.

So the first alternative attempt (many moons ago) was to buy a Wi-Fi dongle, but the one that I’d bought turned out to be as useful as a buying a fridge – freezer for the North Pole. The TV didn’t even recognise the dongle, then more time was spent searching for a compatible dongle, but that took more effort than trying to land a man on Pluto, it was very fruitless to say the least, so the project was shoved away, besides at that time our internet speed was terrible. 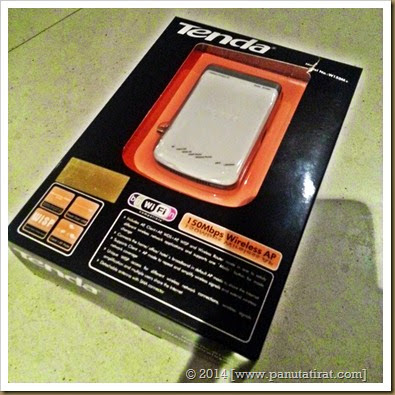 So today after looking at various alternatives, I discovered that there is a type of device that picks up the Wi-fi signal and output it in a form of an Ethernet cable, this type of device is more than just that, it can become WDS + AP mode, WISP mode, a repeater, a Wireless router mode and so on, the mode that I needed was Client + AP mode (I am just copying all these terms from the box, and have absolutely no idea what they are, lol.)

I’d thought setting it up was going to be a nightmare, setting up router scares me more than standing up to your mother, haa haa haa haa haa. Anyway, this relatively cheap one came with quite a good instruction (CD), that with my limited experience was enough to get it going after one try.

Firstly I had to hook up this thing via Ethernet cable to my Notebook, to access and set it up, ensuring all the information for the main router (such as SSID, Password, Encryption type, channel used and so on) were at hand. There was also a handy ‘scan’ option during the setup, to scan the available Wi-fi signal, making entering the information even easier, I mean who on earth remembers the MAC address of one’s router? lol.

Then it was a simple matter of plugging it into the TV using the ‘in the box’ Ethernet cable, and surprisingly for me, it worked the very first time :-) I thought I was going to have more fun tinkering, in fact there was no tinkering at all… All in all it took less than 10 minutes, and I was expecting at least 2 hours of going back and forth, haa haa haa haa haa.

Oh this thing costs around 850 THB (around 26 USD), not too bad at all and with a lifetime warranty too.

Email ThisBlogThis!Share to TwitterShare to FacebookShare to Pinterest
by Panu at 23:54
Labels: Ethernet, IT/Tech./Photo., Router, Wifi