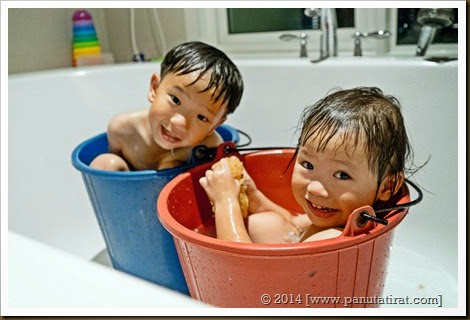 This was taken only this evening (why were you two in a bucket? will explain this in another post, lol), what an exciting day we had today…

It all started with a debate whether we were going to let Matt continue with his Chinese lessons. The time slot is actually very convenient, 10:30 to 12:30 every Sunday, but neither your mother nor I speak even a tiniest amount of Mandarin. So following up what you’ve learnt back at home has been quite impossible. And at the end of the day we really wanted to have more time as a family so it was decided not to continue. Of course we asked Matt if he wanted to continue, at first he said yes and then no, then the final answer was “Up to you Papa/Mama”.

By the time that was concluded (I was still in two minds about it), we headed off to McDonald (just down the road), wow I never knew good old Mc was this busy at eight-ish in the morning, and here in Thailand Mc is hardly a ‘grass root’ level type of eatery, with 2 adults and 2 kids it set us back over 600 THB, considering a can of coke costs (15 THB or 0.41 USD) this was quite a dear breakfast.

Anyway, just as we were waiting for the food (or was it just a pile of chemical? Haa haa haa haa haa) to arrive, I’d step outside only to walk into some rancid goo leaking from a huge pile of rubbish… what a great start… oh the smell was like death mixed with death’s mother in law. I did the best I could in the Mc’s lavatory but somehow my breakfast didn’t taste so nice, still deciding if they had forgotten some chemicals or was it just me and the rancid goo on my feet.

There was nothing else to do except to return home for a quick wash and a debate on what to do with the rest of the morning. Your mother had just gotten a new phone and needed to get a new SIM (micro), so off we went to Central Rama 3, I must say everything went smoothly (at the beginning, lol). Your mother go her SIM, Matt was bought a couple of new shorts (for home). Mar was bought a new dummy, only because we had forgotten to bring one from home, and of course it could only be me who can buy a child a wrong dummy, should have gone with her usual brand… haa haa haa haa haa, so much for trying to be adventurous, Mar couldn’t spit it out quick enough, lol.

Soon lunch was upon us, we were all quite relax, the noodles came quick and hot, by the time we were finishing lunch it was close to 13:00… as lunch wound down our conversation turned to Matt’s Chinese lessons once again… in effect I said ‘Matt isa already doing a lot on Saturday, Golf, Music and … ‘ as soon as I had mentioned ‘Music’, your mother’s face turned absolutely white and so was mine… 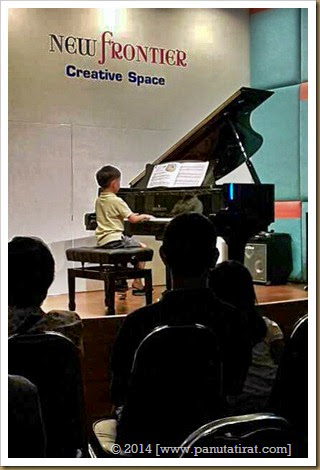 We had totally forgotten that Matt had his pre-concert evaluation today, some important big shot was coming in especially to review all the students who were to go on stage… Matt’s time slot was, you’ve guessed it… 13:00. Noodles were still half way from the bowl to my pouted lips haa haa haa haa haa.

It must have been a strange sight to see a family ran across the mall with noodles still hanging down from the dad’s mouth, haa haa haa haa, oh… it wasn’t that bad. The worst thing was that we had to stop at home to pick up Matt’s music sheets first. All along the way I was calculating how late we were going to be, 5 mins for this bit of road and another 3 mins at the traffic lights and so on, of course I have never been correct in any of these little calculations, it was more like a mental study to keep my cool, and of course that have also never worked either, lol.

Driving a van like a Nigel Mansell driving his F1 car was a bit of a lark, haa haa haa. Anyway, I should have been given a gold medal to drive from Central Rama 3, stop at home and managed to have Matt in his class in approximately 30 mins.

Then came a second surprise, all we have been told was that Matt was going to play his piece in front of this music guy, but what we didn’t know was that it was going to be like a mini concert in itself… haa haa haa haa, your mother was sweating it because she hadn’t made Matt practice this morning… but on the other hand Matt was cooler than a cucumber that had been left on Pluto for a millennia :-)

Afterwards, Matt’s piano teacher came up and said that he’d done really, really well (much to her surprise too, because yesterday Matt was off the ball just a little). Soon we were back home greeted by your waiting grand parents.

As the afternoon wore on, the both of you were getting restless, so off to Lumpinee park we went, we haven’t been back here since the protestors had taken it over several months ago. The park was as beautiful as ever, taking our usual boat ride on to the lake was amazing, it has been so long. 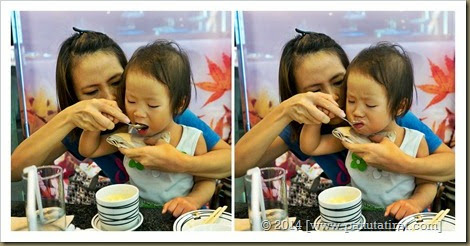 Dinner was  uneventful (still fun though), but by the time Matt was getting into bed he said he had a headache and felt a little cold… I am hoping it’s because he is just tired (did not have an afternoon nap today). Look like another sleepless night for me, will need to monitor his temp for tonight.