The third day was really for your mother and I, ten years ago we were both volunteer at Yan Yao temple, to help out with the aftermath of the Tsunami's devastation. What we did would be best if we told you directly, as an overview, my job was working with the Doctors to process each body and try to identify them as best we could, while your mother ended up in charge of hygiene, just imagine Ghostbuster style Proton Pack but instead of deadly ray it was filled to the brim with disinfectant. Your mother had to walk all over the grounds where the bodies were laying and do the best she could. Your auntie Tip was there too, and her job was to identify the already processed bodies and match them with the grieving relatives, in effect bringing them home. 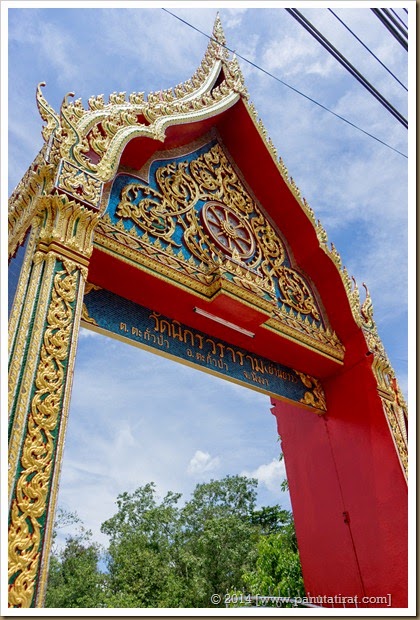 The drive from our base to the temple, which was in Phang-na province was going to take 2 hours, adding to my incompetence to follow simple directions meant in reality it took us two and a half hours (only got lost once, haa haa haa). So it was nearly noon when we rolled into the temple. I must admit, my palm was sweating more and more as we got closer to the temple, during the two hours drive our conversation (between your mother and I) was nothing but about what we did ten years ago, it did bring back a lot of humbled memories.

The atmosphere couldn't have been different (understandably), now the temple was as calm as it could be, your mother and I could recongise the main temple and the main buildings (your mother and I started off looking after the stock room, well it was more like stock mountains).

We talked a lot, and took a long walk around the temple and its grounds. I can still remember the building where the bodies first piled up, and then due to the influx, eventually the whole grounds were taken up.

On the drive up, while we were very close to the temple we recognised a building where we slept, it was a public library, and each morning I would walk alone to the temple, must admit although the team knew each other very well but during our time there we don't often talk, the new year was just a bottle of beer, and a very early night, too much to be done. So on our drive back to Phuket we stopped off quickly at the library for me to get a couple of shots :-) 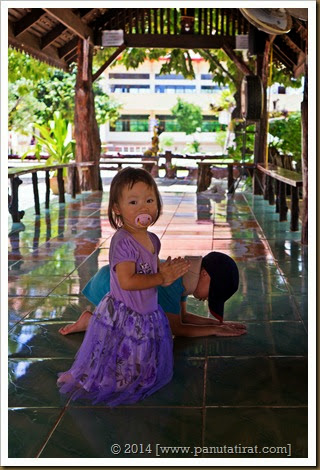 Finding a place for lunch was another adventure, no good recommendations were coming up on G-map, so our strategy was to head to a nearest beach because there are always some form of a passable restaurant there. But where we were driving at that time the beaches were very small, although beautiful but has no restaurants (not even buildings). After driving along for a while your mother came up with a winner after some frantic searching on the net, lol. The food was quite good, but the view of the beach down below was fantastic… our conversation suddenly returned to the tsunami..., ‘Just imagine how it looked ten years ago’… I must admit, not one of the best way to end lunch.

By the time we got back, Matt was fast asleep, Mar acted like she’d just finished her seventeenth redbull, so there was no other option but pool time for Mar.

A friend of your mother has a great restaurant in Patong, so we all headed there for supper (Matt was still asleep when I carried him into the car), it was a fantastic way to end the day. Because your mother wanted to catch up, so after supper I took you two back to the hotel, while your mother continue chin-wagging away :-)