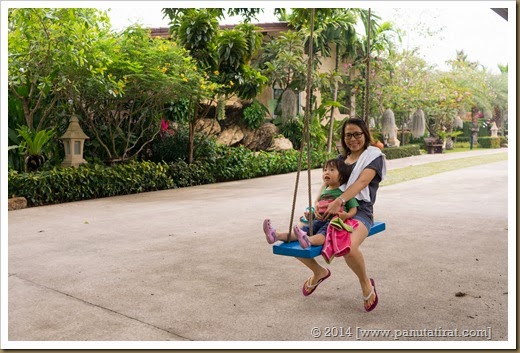 Can not believe it was already half-term, we were going to go to Karnjanaburi, but since it has been a while since we have visited our friend Chat (uncle Chat to you two) and his family in Pattaya, so duly we changed our course to Na-Glure, which is like a district in Pattaya.

Managed to take the Friday off, but for the first time your mother decided to leave the night before, eventually we managed to leave the house around eight-ish in the evening on Thursday, and by ten we were already in our room at Villa Wanida. Matt hasn’t been here since he was about two and now the place has grown considerably.

The mosquitoes were in abundance as usual, and of course we came totally unprepared… at the end of this stay Mar was more blotchy than Mr. Blobby, haa haa haa. The good thing of arriving the night before meant we had 2 full days in Pattaya. 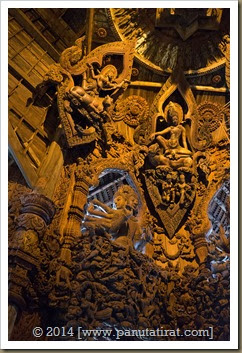 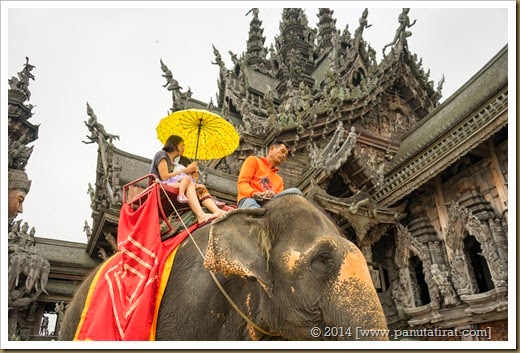 The first day was spent at the Sanctuary of Truth, the last time we were here we promised ourselves to actually go down and see the temple, and this time we did, and the only word to describe it was ‘WOW’… it was a bit pricey at the gate (500 THB/adult) but I think it was worth it. 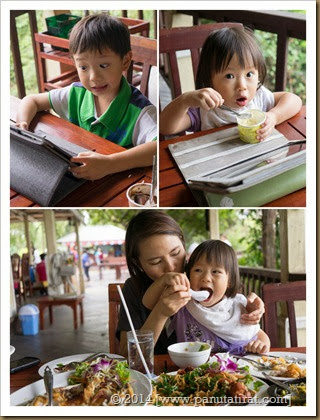 Apart from the temple, you two managed to con your mother in to an elephant ride (400 THB), haa haa haa. Mar was fearless in feeding the elephant (100 THB) which literally gave your mother about 3 mini heart attack (Mar kept running in between the elephant's huge legs), feeding the fish was fun (40 THB), using the toilet (10 THB… just kidding it was free, haa haa haa).

The whole point of coming here was really for lunch in a restaurant at the top of the hill with a great view of the whole temple (actually I am not even sure if one can call it a temple). As usual your mother ordered enough to feed the five thousand, luckily the breakfast at the resort was terrible and I had literally ate as much as four thousand nine hundred ninety seven individual.

The rest of the afternoon your mother went shopping for fresh seafood ready for that night BBQ at Chat’s house, whilst you two (and I) went and played in the park. 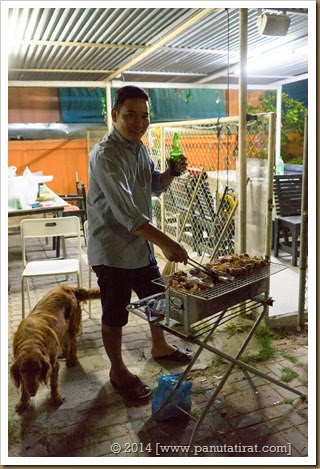 The evening was spent at uncle Chat’s home, he has two children very close to your age brother almost 5 and sister almost 4 (I am probably wrong on this one). Well, as usual, your mother and uncle Chat’s wife, auntie Larb did all of the work… thank you :-) the BBQ was fantastic thanks to uncle Chat's special dipping sauce... :-) more closely guarded than Mr. Crabby secret recipe.

The next day was a bit of a laugh, started off with a terrible breakfast, then a swim, and this is where I don’t understand you two, when the shower gets just a little bit cool (not cold) you two scream your head off, and when the pool is absolutely freezing you two couldn’t wait to jump in? 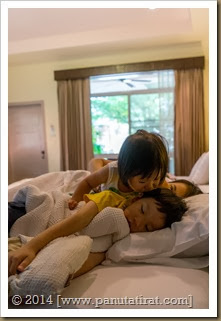 The afternoon was nothing more than just laying around, then it was off to lunch with Chat and his gang, then back to the hotel to swat the mosquitoes, haa haa haa, during the way back Matt fall asleep, Mar was doing her best to wake him up though, haa haa haa.

The day ended with another supper at uncle Chat’s home, then it was time for bed, well only for you, I got on the resort’s bicycle and went back to uncle Chat’s (literally 3 minutes away) for some more civil conversation, the main subject was about Heinekens, haa haa haa.

The final day’s plan was to check out early, find somewhere to have lunch then head to the Khao Kaew (mountain green) Open Zoo, but unlike the A Team, the plan did quite go as planned, haa haa haa. You two got up really late, so by the time we checked out it was almost time for lunch, we decided to head into Pattaya, Central Festival (shopping Mall), wow what a mistake that was. 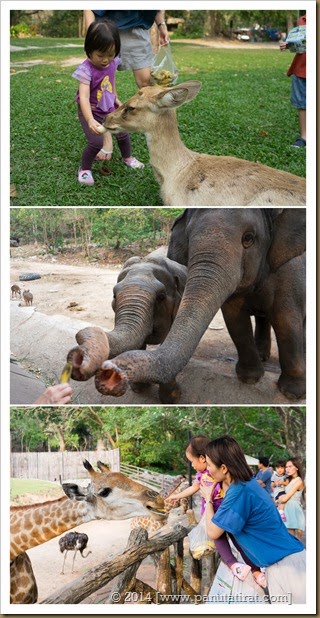 Traffic was terrible, it was crowded, the restaurant we wanted to go to had a long queue, we found an alternative and it was so so, but Mar was not in one of her eating mood, haa haa haa. So I took Mar out for a walk and unfortunately we’d walked past the playground… I said unfortunately because when we’d left the playground, well you didn't leave, I carried you out, kicking and screaming… and you didn't stop all the way back to the restaurant.
I was glad to make it out of the mall, I’d really wanted to go straight home but since it was still early afternoon we’d decided to stick to the plan, and forty minutes later we've found ourselves at the gate of Green Mountain Open Zoo :-)

Feeding the Giraffe was ok… feeding the deer was alright, feeding the elephants was so yesterday (yawn yawn, haa haa haa), now feeding the rhinoceros will always be special, because one was simply terrified… haa haa haa.

Usually Mar would be the first one in there to feed them, but with the rhinoceroses she’d actually turned back to Matt and waited… I can see her thinking, ‘Can you please go first Matt?’, haa haa haa. Matt was a bit of a cleaver clog, decided to buy the long grass so that he was at some length away from that marvelous jaw… haa haa haa.