It was a bit of a rush arrangement really, but with hindsight I think out of all of our trips to Cha-am, you two probably enjoyed this one the most. 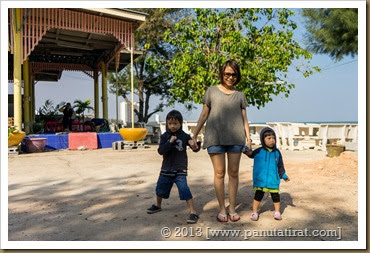 We were only here for two short nights, but what multiplied the fun factor were your friends, who all promised to meet up (well the parents did), and as a result I have solved the world’s energy problem. Put 5 children in the same room, actually generates enough energy equivalent to at least 7 nuclear power stations.

We stayed at our usual hotel, we arrived after lunch around 14:00, and of course the first thing you two wanted was to jump in the pool, but the weather was cold, and I mean cold but what could we do, Matt was already running ‘commando style’ around the room looking for his swimming suit, Mar was trying her hardest to go commando too, haa haa haa haa haa.

The pool was freezing... luckily the water in the small pool was only as high as my thigh (and that was bad enough), the both of you jumped in totally unconcern. Of course your mother was sitting looking cosy on the deck chair trying to splash me the best she could... :)

The wind picked up quite bad, and the sun was not doing it’s job in keeping us warm, Matt was visibly shaking, Mar was also looking very cold, but the both of you still refused to leave the pool, that was until we promised you a nice long warm bath... 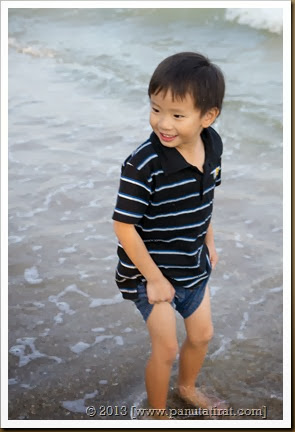 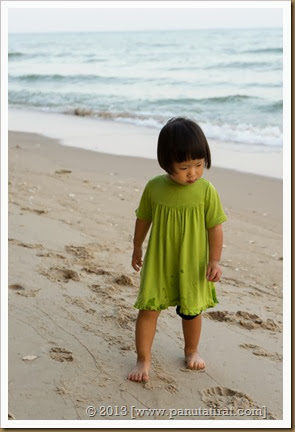 After the bath you two settled down in the warm room to watch some TV, that was when Ada’s mother called, Ada and her family was also staying at the same hotel, naturally the place to meet was on the beach, it was sand castle time...

That night we took dinner in the hotel, too much hassle to go out and you two were pretty much tired out by then anyway. The following day was going to be a very interesting day indeed, five school friends all together for the whole day... haa haa haa.

After breakfast we took a quick walk along the beach, which was a mistake, convincing you two not to jump into the sea fully clothed was a nightmare, but we managed it somehow, by about eleven-ish it was time to go to Nondth’s house.

Nondth’s parents has a house in Huahin (about 20 minutes drive), along the way we stopped to get Matt’s milk (ran out once again) and some lunch, so by the time we arrived, Ada and Nondth was already playing on the beach, Ada’s brothers and sister were also there building their sand castle.

Getting you two into swimming suit had never been easier, haa haa haa, about half an hour later Otto arrived to join the gang :) I think altogether there must have been around 15 of us running around, lol. While Matt was busy with his friends, your mother took Mar on her first horse ride along the beach. She said Mar was singing all the way up and down the long beach :) 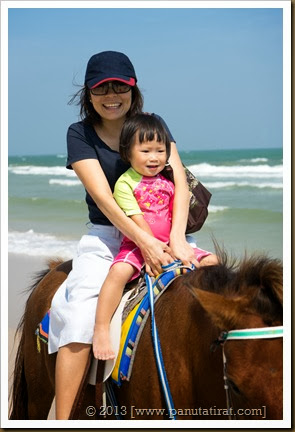 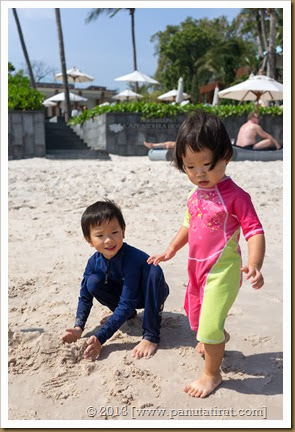 The beach was beautiful, but we had to go back to Nondth’s house for a late lunch, now imagine all the children in one living room... haa haa haa.

After showering, lunch and play, two hours went by what felt like ten seconds, then it was time once again to move the troops to Carter’s house, his parents (and brother and sister) lives at Kao Ta-keab, another 20 minutes drive away.

Carter’s house was beautiful and very large, you and your friends had a wonderful time, the parents were of course extremely happy too, mostly because of the delicious wine, haa haa haa.

The beach at Kao Ta-keab was again very beautiful and very different, the sand was slightly denser and darker, but the the backdrop of the beach was this wonderful mountain, wow. Carter’s mum was brilliant, she’d organised a horse ride on the beach for all the children, accept for Mar, she was too small to ride on her own and I don’t think your mother fancied another horse ride. 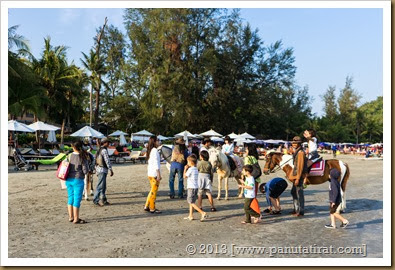 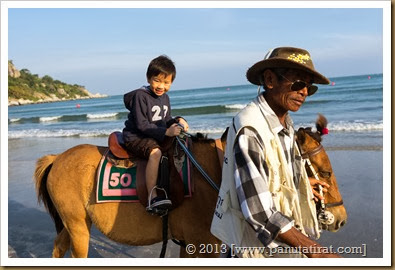 Matt totally enjoyed himself, I was hoping he wouldn’t ask for a horse for Christmas :) In a flash of an eye it was time for dinner, Carter’s mum again did all the hard work, and thus the barbecue was delicious :)

By the time the moon arrived, we all took a short walk back to the beach, but now it was all quiet and very dark, Carter’s mum bought some paper lantern (these are huge paper lantern, at least 2 to 3 feet tall and a foot wide), these paper lantern had wire at the bottom, and to that we attached a circular disc which burns brightly, the heat from the disc would then provide lift for the lantern. 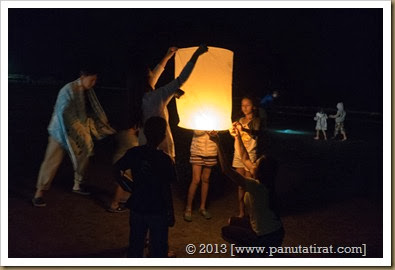 Getting the first one up was a bit of a challenge, but it was a wonderful, wonderful sight to see a bright lantern soaring through the deep dark sky, soon the second, third and more followed, each one was cheered on by our gang :) Some tourists came by and wanted to buy them from Carter’s mum, she was kind enough to let them have for free :) the more the merrier, haa haa haa.

After all that excitement, saying goodbye was a bit tough, of course none of the children wanted to go home, especially the older ones, but all parties must come to an end, and it certainly ended on a high note. We couldn’t say thank enough to Carter’s mum and to Nondth’s parents too for being today’s hosts, it was a fantastic day.

Right on queue, both of you felt to sleep in the van, the traffic was absolutely horrendous, the half an hour drive turned out to be more than an hour, apparently there was a firework event in Huahin, and it seemed like all the people in surrounding provinces came to see the show, lol.

The original plan for Sunday morning was to check out early then head to Santorini, a fun / water park not too far from the hotel, but your mother and I was pretty much running dry, haa haa haa, no energy left. So we took it easy with another play on the beach, while walking to the beach Mar and I had crossed the road first, while Matt was waiting on the other side with the hotel security guard, of course Matt decided to cross the road by himself and caught up with me just as I was arriving on the other side, and out of the blue this cyclist came out from the right side and missed Mar and I by about an inch and by about a centimeter with Matt.

Of course your mother arrived just in time to see all those close misses... I was not in her good book for the remaining of the day... 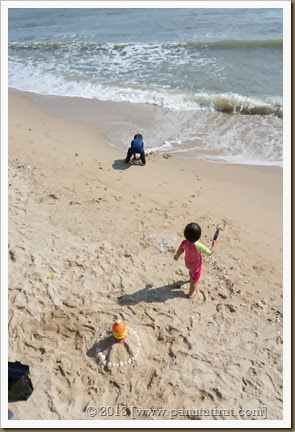 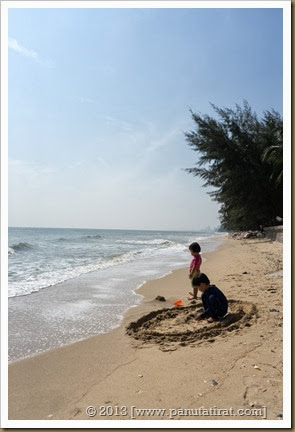 Driving home was a bit of a nightmare too, the traffic was long and very slow, it was due to an accident about 60 kms from Bangkok. Instead of arriving at four-ish, it was almost six when we got home. The day doesn’t end here, your mother had really wanted to go to the protest that was not too far from home, so all of us quickly unpacked and jumped into a taxi to Silom intersection, blowing whistle was a thing with this protest, I think it was a mistake to give you two a whistle each, a really bad mistake, haa haa haa.

I was out of it by then, so we decided to have something quick to eat at Burger King, Mar was in a terrible mood, her bed time had way passed, so she was being a bit difficult, eating only fries and not even considering anything else. I took some fish and quickly put it in her mouth, now that was a huge mistake, especially when she was cranky. Mar turned and looked at me like I was a piece of poop at the bottom of her right shoes (which is by far her favourite side, lol), then she threw my mobile phone across the restaurant... :) I would like to suggest a career in discus event for sure :)

Of course the way back was a bit of a problem, finding a taxi was slightly less difficult than putting a man on Mars, but your mother did manage to find a Tuk-Tuk. Riding in one of those on a cold night was great fun, especially when there was no traffic, while the driver was going full pelt, you both were totally silent on the way home, probably thinking will we make it home in one piece... We did... and it was fun... haa haa haa.