When I was studying overseas many, many years ago, just imagine me being a boy at the age of 10 :) there were only 2 ways to communicate with your grandparents, normal 'paper' mail and fixed line phone, both of them were pretty inconvenience.

I still have a pile of mail that my mother had sent me, as for the telephone, in our boarding house the main phone was in our Housemaster's quarters, so each time they call (which was very rarely, probably 3 times a year) our Housemaster (Mr. Bradnock, probably the best housemaster in the Universe) will have to find someone to come and find me and that could take hours... haa haa haa, we were always playing (and probably getting into trouble) outside, so more than often I would have to call back (the phone wasn't even digital :). 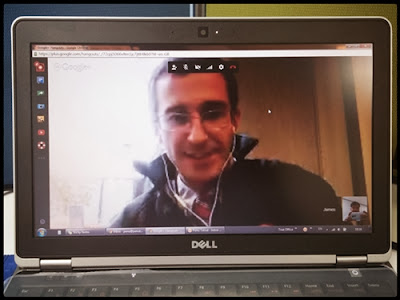 Anyway, I am always in the Google-verse (as soon as the OS loads) even at work, so last evening I was at work (working... obviously) and suddenly there was a short text message on Google Hangout, now I have never used Hangout simply because no one I know was on it.

The short message was from a very close University friend, whom I have not seen in over 16 years. Probably 5 seconds after the short text message I realised with one click of a mouse we could be on Google Hangout chatting face to face, and that was exactly what I did, only to be directed to download a plugin. Well that was harmless enough, the plugin took about 10 seconds to load and another 5 sec to install.

With the next try we were on, and as they all say, he hasn't changed a bit... haa haa haa, it was a great way to end a Tuesday... haa haa haa, looking forward to see him again soon :)

Email ThisBlogThis!Share to TwitterShare to FacebookShare to Pinterest
by Panu at 14:45
Labels: Friends, Google, Google Hangout