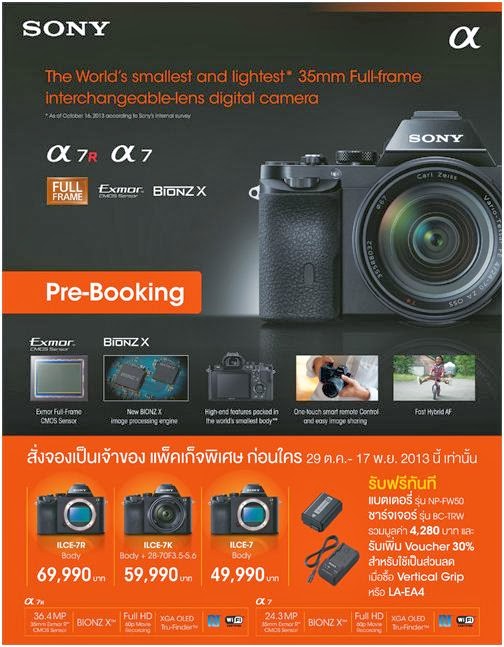 Looks like Christmas has come early this year, the pricing for both cameras were as expected, when converted back to USD we are talking about 1,930 USD for the Alpha 7 with kit lens, I think that is about inline with global pricing (of course that should be the case, otherwise if it was cheaper in Thaiand everyone will be buying it from here. Unlike cars which for luxury brands could be as high as 3 times the European prices due to added tax).

I am trying to keep my ‘greed’ level down (unfortunately there isn’t a pill nor app for that)... haa haa haa. So far the world’s attention has gone on the 7R which is more expensive due to “Better” specs, however my interest lies totally on the 7 (supposedly with faster focusing speed), I don’t want the high megapixels but do need fast/accurate focusing.

In the poster they are asking for pre-bookings, with the added bonus of receiving a free battery and charger (about 4,000 THB) and also a 30% discount voucher for either the Battery grip or the LA-EA4 adapter.

Well, that still isn’t enticing enough for me to make the jump like I did with the NEX 5, mostly because at that time my camera was stolen and needed something quickly (Matt was growing up fast).

I am hoping they’ll do really well with the 7R but not so well with the 7, then perhaps the 0% 10 months will be on the card, or they could do the A99’s campaign (free vertical grip, free SD, free house and a dog too :) but I am not holding my breath for that one. Any special campaign will be several months away and that is just enough time for either DPReview or CameraLabs to do their review.

I am getting the hots for the vertical grip though... haa haa haa, I am hoping hell will freezes over soon otherwise I wouldn’t have a chance with your mother on this one, lol.
Email ThisBlogThis!Share to TwitterShare to FacebookShare to Pinterest
by Panu at 17:12
Labels: Camera, IT/Tech./Photo., Photography, Sony