For some unknown reason, I’ve never really got any personal traction with Evernote, the whole package just didn't click with me. Not that Evernote was such a terrible little thing, for all I know it could be the best, I mean to have built something which is the be all and end all for everyone is an impossible task no matter how excellent it is, I know of at least three normal, intellectual beings who despise Blackadder, now that I don't understand. 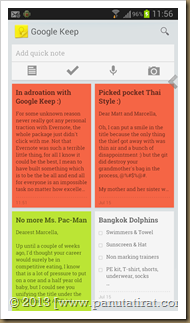 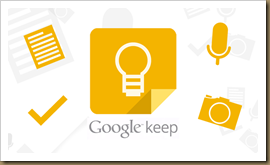 So for the longest time I've been using Google Drive to write all the draft posts and other things while on the go, but I really wanted something simpler, faster and with ability to add photos, make lists and so on, in another word an alternative to Evernote.

After loading some updates on the Note 2, suddenly 'Google Keep' icon popped up. Talking about perfection (going a bit over the top here), the first thing that had me hooked was the simple, clear functionality, and clean design, then came the knock out punch... … … the font was fantastic, I have always had a bit of an OCD when it comes to using the right font, and they had it perfect for me (this is on Android Galaxy Note 2), I've been going back to the app just to look at the font... haa haa haa haa haa.

The experience of using Keep on a PC is quite similar to the mobile, clean, simple, minimalist, and charming, but I still prefer the Note 2 version due to the font. Just found out that the font is 'Roboto Slab', commencing download... will it beat my reigning King, PT Mono :)

[10 minutes later]... Roboto Slab does look great in Word (even a tad better than PT Mono and PT Sans) but the display wasn't 100% correct, the very top of each character was missing (at 10 pt), so the reigning King stands... :)