Prometheus, the next chapters :)

Just sat through Prometheus for the n-th time, when I really should already have my head on a nice soft pillow.

Visually it was mesmerising, the soundtracks were haunting (which was perfect), the acting was top class and the plot was... I can only assume, ‘kept perplexed’ on purpose. 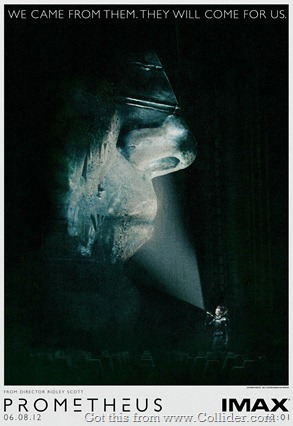 Soon after the movie was released (May 2012) there were several questions on so many topics regarding Prometheus (and all of them have been discussed to death, lol), here is just another 2 cents worth on why the Engineers wanted to put those black goo on earth, and I am sure I am not the first one to think of this.

Another train of thought

Then there is this one

No idea if there will ever be a Prometheus 2, if there was, the plot needs to be an amazing one, I am afraid if the plot was weak, there will be so many complaints that people will break the Internet, haa haa haa, and I don’t want the Internet to be broken :)

Email ThisBlogThis!Share to TwitterShare to FacebookShare to Pinterest
by Panu at 12:36
Labels: Film, Prometheus, Prometheus 2