A couple of weeks ago Matt’s piano lesson was cancelled, so with the afternoon free we decided to go home :), well, another home, this is where Matt had spent the first couple of years before starting school. 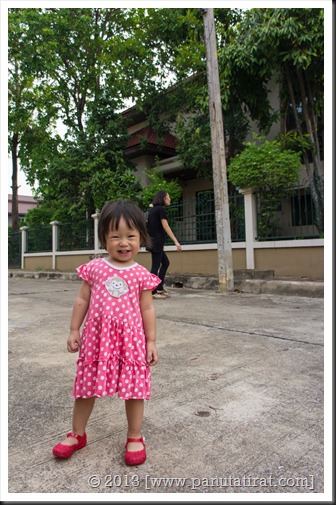 Once he was in school, we’ve found out that the chore of driving him for the mere 22 Kms was like trying to empty the ocean with a fork, a bunch of frustrations wrapped very tightly around a handful of pain is the best way to describe the emotion of driving from the edge of BKK into the city (where most of the schools are). We are talking a range of between 1.5 to 3 hours.

So we moved, but kept the house just in case some smart person invent a flying car or if we could convince Aladdin to sell us his flying carpet, but he is such a git now, since he’d married the princess.

Matt had the fresh air, with trees and plenty of space to run around, to play with birds, cats and dogs… but it was always a rush to get anywhere. March spent her entire time, growing up here in the condo, the concrete jungle (not even a stair to climb, lol), but everything is so close and there are so many things to do to keep a young mind motivated :)

I just miss the trees :)