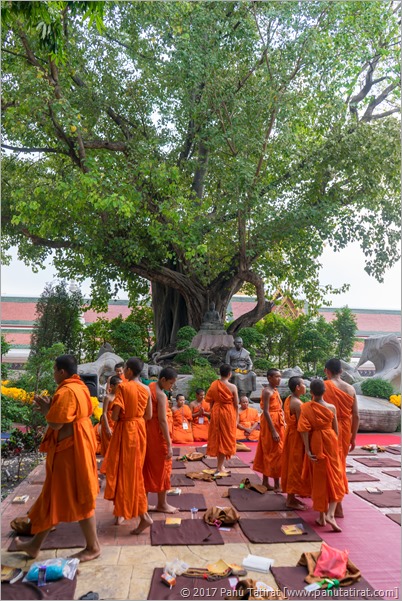 The cremation ceremony of our beloved late King Rama 9 was held on the 26th of October 2017, people queued up over nights so that they could joined the ceremony at Sanam Lhuang, where the people would lay the ‘Dok Mai Jan’ (flower made from thin slices of wood, to be placed on the site of cremation).

For the majority of the population, the government’s administration had set up 114 stations around Bangkok for the rest who had chosen to also lay down the flower for our beloved late King. I had totally read the situation wrong (again), I’d thought it would have been a simple task to find one of the 114 station to pay our last respect.

Our first choice was a temple near to your school, so we casually got up (Sunday), had breakfast, started to dress all in black and headed out in the van. In less than 10 minutes we’d arrived at the temple (Wat Yannawa), and we couldn’t believe our eyes. There were 2 queue leading into the temple, one to the East and one to the West. Each queue was about a kilometer long, that is over 1,000 meters of people waiting to get inside the temple. Inside we were overwhelmed with what we saw, all that love for our beloved late King Rama 9.

We’d decided to explore another station, Lumpinee Park, even before we’d reached the site, we could see that the queue was just about as long as the temple’s, so without hesitation we headed off to the 3rd stop, Hua Lum Pong.

By this time your mother had decided that no matter how long the queue was, she was going to jump down and joined the line, and on the surface it looked shorter, so your mother jumped out whilst the rest of us headed home, hoping to come out again in the evening.

By blind destiny, about 5 mins after we had dropped off your mother, my father called, he was telling us that at one of the famous temple near my parents had very little queue. Without second thought I’d made a quick u-turn, called your mother to run to where we had dropped her off.

Once your mother was back in the van, she said the queue was super long but it was hidden underground, lol. So off to Wat Sraket (Golden Mountain) we all went, only to find that the whole surround roads were blocked off to all traffic! Luckily we managed to find a parking spot not too far, to walk to the temple was full of purpose and focus. 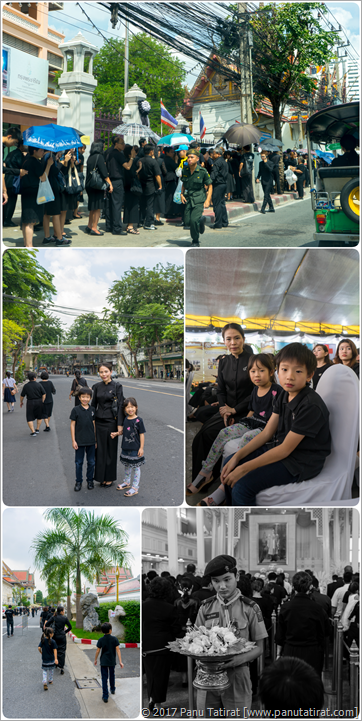 As this one of the main and older temple of BKK, the organiser here was fantastic, absolutely superb and professional, everything ran like a Germany engine. There were two waiting areas, with one feeding into the other (all covered, and away from the hot sun), we were in the first tent for less than 5 minutes, before we were lead into the second even bigger and beautiful decorated tent.

From the second tent we could see the main building where we had to lay down the flower, must have been the whole atmosphere and the environment you two were on your best behaviour :-) In no time we were lead into the building, there was a quick ‘how to’ tutorial. This time we had decided to let you to go by yourself, this is your experience as much as ours, and you two managed it superbly. 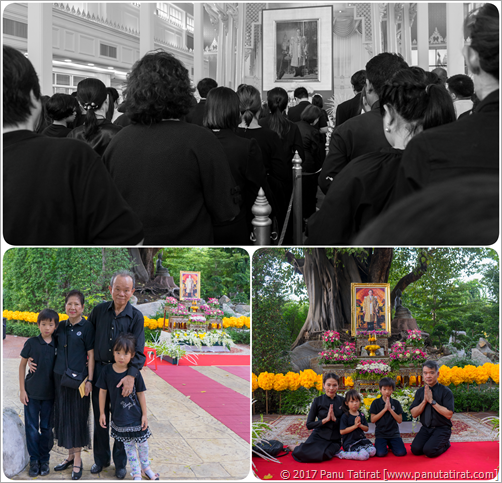 After laying down the flowers, the first thing I did was to call my mother (and father), and told her to put on her skates and come to the temple as soon as possible (they only lived less than 15 minutes (on foot) away). I was prepared for the wait, but only 5 minutes later I found myself picking up the call from my mother, they had jumped onto a tuk-tuk instead of walking. By that time more and more people were arriving, I’d walked them to the main gate close to the 1st tent.

I think it was around 40 minutes later when my mother called again, she had now left the building and was walking towards us... she was very humbled to have this opportunity to say thank you and good bye.