After all the palaver of the visa fiasco, it was so satisfying to be on our way, we were due to fly out mid afternoon (Saturday 5th), haa haa haa), timing was great as we still had most of the Saturday morning and early afternoon to finish packing. 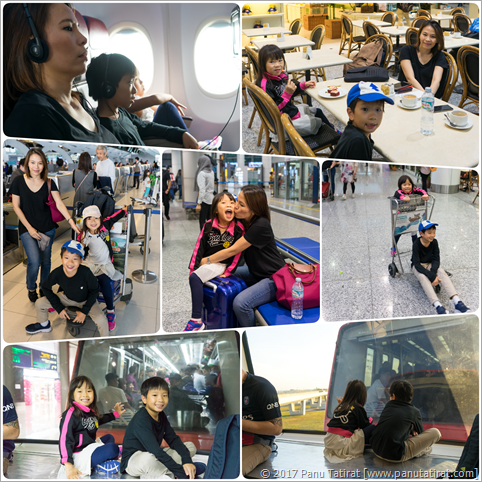 Instead of using the usual Uber, I’d decided to use Grab instead, it was slightly cheaper (but this car was certainly not as clean as the usual Uber), so with only 20 minutes into the start of our family holiday, I was already in trouble with your mother, lol. Your mother got cross at me for talking too much to the driver (who were struggling not to get lost, he is new to the business, lol).

We were in no hurry, and finally made it to Suvarnabhumi well ahead of time, because your mother is in the travel industry she wanted to try Malaysia Airlines (not the best of choice as it turned out, will tell you in later post). Our first chuckled was at the Thai immigration, for local we could have used the ‘automated’ gates that are common in all airports around the world.

But in Thailand one needed to be at least 120 cms tall to use the automated gates, so it was out of the question for Mar, but Matt was way above that now... but (haa haa haa), we were told that the 120 cms threshold was not based on actual height, but the height stated in the passport, considering that Matt’s passport is over 3 years old... and guess what was Matt’s height in his passport... 119 cms... haa haa haa.

Your mother went through the gates while you two and I had to endure the long wait, haa haa haa. Soon we were all together again, my priority was to get you two fed before the flight, as I was not sure how you would take to MH’s food.

Of course you two were in such high spirit, once we got to KL (around 18:00-ish) we had about an hour of layover, just enough time for your mother and I to top up our coffee level (haa haa haa), and in no time we were boarding our flight to Perth.

Here was my first concern, we were scheduled to arrive in Perth around 01:20, meaning we won’t be out of the airport anytime before 02:20 (including picking up the rented car), and so arriving at the hotel around 03:00-ish. I was just scared, with that kind of timing, it would be heartbreaking to have to wake you to up at that time, and I wasn’t even sure how that would affect the rest of our first day in Perth (Sunday 6th). So my strategy was to get you two off to sleep as soon as possible after we took off, haa haa haa, it would have been easier to build a the Great Wall China with nothing but a teaspoon. 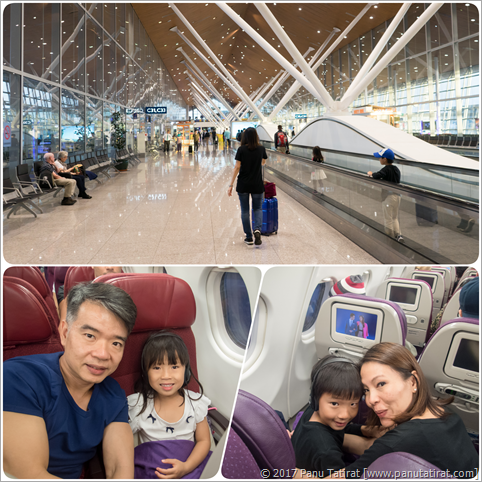 The flight from KL to Perth took around 6 hours, and all I wanted to do was to follow through with my strategy, getting you two off to lala land as soon as possible (eventually you did). Gratefully the flight was uneventful, I should have slept more but all those films... haa haa haa.

The flight was on schedule, and in no time we were all hanging out at the Avis counter picking up the car, I had reserved a Camry, a nice capable family car... the lady there was fantastic (but she was from the Budget booth though), she also taught me a great lesson. Me being my careful-self, I had also bought insurance, but it was third party insurance, so should anything happen I would have to pay Avis first, then claim it back later, so note to self don’t buy third party insurance.

Anyway, Camry turned out not to be a Camry, but a Holden Commodore SV6. Coming from a car rental background and 10 years in the Automotive industry, I fully appreciated the term ‘or similar’ when renting a car, haa haa haa, please don’t get me wrong I was over the moon to have been given an opportunity to drive my first Holden (or is it GM, lol) and a SV6 too :-) To me this was some steps up from the Camry.

To be honest I thought it was going to take much longer at the Avis counter, as it turned out, it took less than 10 minutes, it was fantastic. The car was easily found (great credit to Perth Airport) but it took me another 15 minutes just to find where everything was in that lovely car, haa haa haa haa, and a further 10 minutes setting up the seat and the mirrors (that is BMW training for you right there, lol).

Luckily Australia and Thailand drives on the ‘correct’ side of the road, haa haa haa, and being on the road at 02:20 in the morning was the perfect opportunity to get use to the car and the roads. 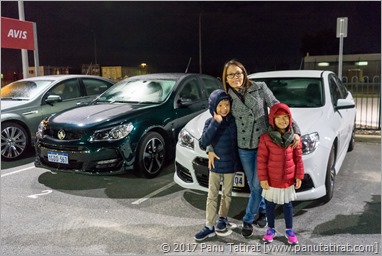 It was partly having too much fun driving, partly being unfamiliar to the roads and the car, partly being two in the morning, partly being cold, partly being in Perth and enjoying your laugh and smiles... Suddenly, there was a double Flash!, Parp Parp, I knew exactly what that was... I instinctively looked down at the speedometer, 87-ish, then I looked up my eyes scanning the short horizon looking for the answer... then I saw 80... darn it... my first speeding ticket ever! Immediately I’d asked your mother to search on the net, how much was the fine... haa haa haa. Your mother looked up, smile and said 200 AUD, holy moly... that is over 5,000 THB. Well, there was nothing I could do now, except to wait for the dreaded letter :-).

Once I had decided to rent a car, the first thing I had to check was, does the hotel have Parking? Luckily it did, but when we arrived it was full (being the weekend) but it was free to park on the street during the weekend (lucky). Novotel Perth Langley was perfect for me, it may not be the best looking or the most luxury hotel in Perth, but the location was gold. The room was clean, albeit smaller than we we’ve use to, but it was more than fine.

It was gone 03:00 by the time you two settled down, finally all was quiet, couldn’t wait to be out and about and breakfast... haa haa haa.

Arriving this early have several advantages, because with only a few hours of rest we then would have a full (first) day to explore the city!