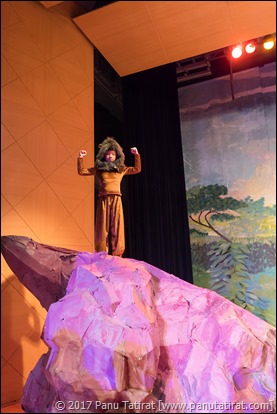 You two are now at home having a great time, enjoying your half-term break. Last Friday your mother and I took time off and after picking you up we drove straight from your school to Pattaya, where the parents from Mar’s class had arranged (several weeks back) to meet up, as it turned out, virtually the whole of Mar’s class were there, so you can imagine the fun... and I think we broke the hotel, haa haa haa.

Prior to the start of half-term, year 4 put on the Lion King performance, and it was fantastic... the production, the costumes, the sets, the songs, the dancing and everything else was fantastic. Many parents, like all of us have seen you all perform from EY1 to now Year 4, and this year for the first time you could feel the emotion behind the performance, you are all growing up so fast, lol.

To make sure that all children had parts, the story broke down into chapters, each class took to the stage for each chapter, so the whole production had 5 children playing the same character but in different chapter. Matt was Mufasa, his scene was when Mufasa was quite cross with Simba, so Matt had to shout and be angry, and he absolutely loved it.

Quite looking forward to next year’s production now... lol.