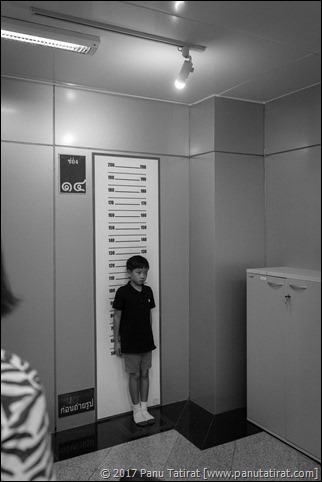 Finally 2 years later, haa haa haa. When I was young (and no, that was not 50,000 BC), one had to be 13 before it was time to get the National ID (‘NID’), and in  Thailand one uses NID for absolutely everything, from job applications, opening bank accounts, buying a car, buying a house to voting.

But recently the age was dropped from 13 to 7, but me being me, I didn’t get my act together until Matt was 9, haa haa haa haa, only 2 years late. Not so long ago it was a real hassle to do the NID, you had to go to the district office that was registered on your housing document, so for us that would mean driving across Bangkok.

But now, with everything being online you can go to any district office to do the NID, so on a fine Saturday morning, after your Golf lesson, we literally walked 3 minutes to the district office next door, lol.

Unfortunately the documentation that I had prepared were not the original, and they needed the originals. But we still had plenty of time, all of us bundled into the van, went home, washed and in jiffy we were back at the district office.

Matt had to answer some questions (parents’ name (that alone was a struggle, haa haa haa) and etc.), then it was time to review the documentations, all passed with no hassle. We were stumped a little when the officer asked which religion was Matt... me being a Buddhist and your mother being a Catholic, so when the question came, I looked at your mother and your mother looked and me and both of burst out laughing... lol.

We ended up not putting in the religion, well Matt can decide for himself once he is old enough... after checking the documentation, it was time to submit the biometrics, fingerprints, then a photo shoot, haa haa haa.

Then there was a long wait, which was strange, only to find out later that their equipment broke, lol. Luckily after about 20 minutes the lady managed to fix everything... your NID is now with me permanently... and now and then I would take it out to have a look, it always put a smile my face... haa haa haa.