Busy day with princesses and science :-)

I have been scratching my head on how to sort out this Saturday (4th) for the longest time, first and foremost, your mother was now in Atlanta (after something like a 22 hour flight), that left me alone with a dilemma... haa haa haa. 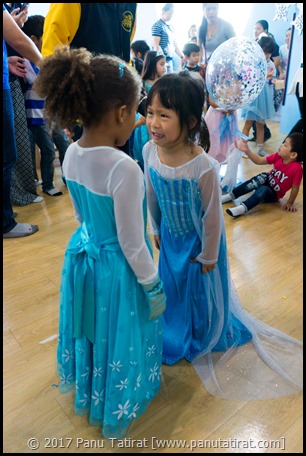 Mar has her heart set on ‘Brea and Prin’ Birthday party which stared at 15:00, missing this would absolutely break her heart as well as my ears, whilst Matt had an unmissable science project preparation meeting with Ryo at 15:30. It would have been alright if the two places were next close to each other, unfortunately, it was virtually on the opposite side of the city, haa haa haa.

Your aunt once more stepped up and saved the day, she offered to spend her Saturday afternoon accompanying Matt to Ryo’s place, I was a little worried at first, Ryo’s mother is Japanese so the thing I was worried about was the communication. But with today being 2017 one should never be worried about that. Matt’s practice should have been an hour or so, but it ended up being over 3 hours :-)

On the opposite side of the city, Mar was having a great time laughing, playing, running, jumping and smiling with her princesses friends, she woke up early and went straight to the cupboard to choose her dress, haa haa haa.

A bit of a drama at the end of the day for Mar though, haa haa haa, at the end of the party, our great host gave a gift bag to each kid, and Mar was super excited. However, Mar was one of the last one who left the party (held in a huge indoor play park), and someone had taken her party bag... oh noooooo.

Eyes were welling up fast, and soon it was the whole waterworks.... lol, luckily one of the parent came to the rescue (she literally saved my life and I am forever grateful :-) ) and gave one of the party bag to Mar...

At the end of the day, it was great to hear all the great feedback from Matt, so you both had a fantastic day, and I was just glad that the day was over... haa haa haa.