For the longest time, even before you were born, all of our important document were kept in separate hanging folders, which were placed on one of those rather thin metal frame. You two had a folder each (which were full to the brim and as fat as waistline), of course for me I had several folders one for each bank, workplace, car and so on, and lastly a couple of folders for your mother. Overall I would say we had around 30 folders “pretending” to be organised... haa haa haa. 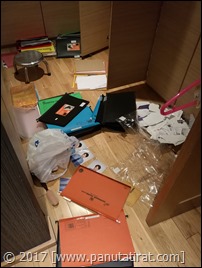 Things were being filed without much consideration, at (several) times, haa haa haa, I said it was time to tidy up but never got round to it. Do you know what broke the camel’s back? When I couldn’t find my wedding ring, ‘yes’ I had filed that too (when my finger got too fat, haa haa haa), but now after months of hard work, I was looking forward to be wearing that ring once more... but I just couldn’t find it, but I knew for certain that it was in one of those folders... like I said, all things important go into one of the folders, haa haa haa.

Not being able find the ring, after going through each folder was annoying me and stayed with me for days. Until last weekend, by chance we had to go to Makro (wholesale supermarket), with the team split into two, your mother and Mar did the proper shopping whilst Matt and I was just roaming around with the shopping cart ‘drifting’ in and out of the ‘windy’ aisle (this is where they sell the fans, which were on full pelt, haa haa haa). 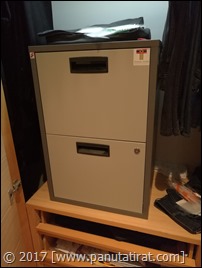 Team B came across aisle of metal cabinets, and it was perfect! Picked one up without any thought (2 tiers, with hindsight should have bought 3 tiers instead), and it was very much to your mother’s surprise, haa haa haa, and I knew that I wouldn’t be sleeping that night (and I didn’t).

By the time 01:00 flashed on the clock, it was really time to pack it in... with only a couple of folders to go I could have carried on but one never knew what would be next, so it was the best of decision just to step away. Managed to throw away more than half of what I had stashed away, you two now have 8 folders each, your mother also have more folders associated with her, nothing will never be lost again! (haa haa haa, that is a totally wishful thinking).

And ‘YES’ I did find the wedding ring, it was caught in between leaves of paper in the ‘apartment’ folder, and I was over the moon, lol.