A game is afoot… 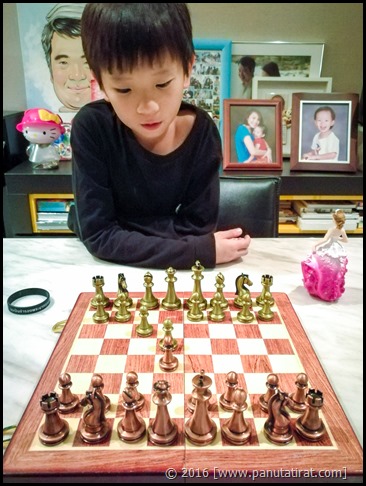 All I know about chess is how each piece moves and a general understanding for the rules of the game, but apart from that, I have as much chess skill as a fish knows how to climb a tree. In short you and I are probably at the same brilliant level, haa haa haa.

So recently we have been playing ‘Snail’ chess, simply one or two moves per day (we use this small plastic figurine of a lady in a pink dress to indicate whose move it was), at the beginning it was working out great, until we noticed that some pieces were moving on its own... then we discovered that whilst Matt and I were away, Mar had been moving some of the pieces, based on a throw of a dice... haa haa haa.

So over this weekend Matt and I decided to take the match quite seriously, well as serious as one could (which wasn’t very, haa haa haa). We did sit down, with no TV in the background, no music playing, just Matt and I trying our hardest not to make jokes at the other person’s mistakes, and oh boy, there were tons of mistakes, lol.

Just a little over an hour we played 2 full games, going back and forth on both sides why each move was made, it was great fun can’t wait until the next match tonight.