A Nation in Grief and Mourning.

There is a bit of a ‘blogpost’ traffic jam at the moment, just don’t have the time to get them out. But I have to write about the heartbroken event which happened on this past 13th, that had drove the whole nation into the endless pit of sorrow, even now 9 days later I am still feeling waves of utmost sadness that is quite indescribable. 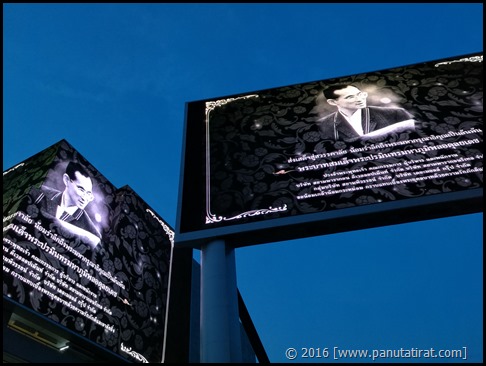 On the 13th, at 15:52, our most beloved King passed away peacefully at Sirirach Hospital. It was really surreal for me, my plane landed in BKK from KL at around 14:20, and as soon as I had landed, through the endless channels of social media, my mobile phone began to be filled up with rumours, the only thing I could be sure of, was the official announcement from the government to be aired at 19:00, and it’d just confirmed our worst, worst fear.

The conversations that evening between your mother and I flickered here and there but it always drifted back to our beloved King.

On the following day, I had to be up at 04:00 to catch yet another short flight to Vietnam (day trip), more confused than tired to be very truthful. A few years ago Don Muang was our only airport, now it had been dedicated to the so called ‘Low Cost’ Airlines, even at 05:00 it was busier than Jatujack Market at the weekend, lol.

Being out of the country on the following day, meant I wasn’t in the midst of the sadness and anguish, together with the work keeping my mind occupied and away from the event in BKK. After a very long day, my colleague and I caught the last flight out or Ho Chi Minh City back to Bangkok, the final flight was at around 21:30, and didn’t arrive until 23:30.

Even now a few days later, I still find myself thinking of the King, quite surprise on how much this is affecting me emotionally, lol. The whole nation is wearing black, it was challenging spending the weekend trying to find black shirts, for your two and your mother the task was quite simple. For me, I gave up after visiting 4 shops, lol.

You can go back and read up on the history of our King, then you’ll begin to scratch the surface on why the entire nation is in mourning, he had truly given himself to the people. For me, I have my own reasons.

We are Chinese, your great grandparents on both sides came from China, and you and I are lucky that they had chosen to come to Thailand! For Thailand treated everyone equal, the Chinese (or any others) were not treated differently than the native Thais, all of us have equal rights and you have no idea how lucky we are to have that! A country not too far away is very different, just an example, there is a cap on how many Chinese and other race of students the universities can accept in a single year.

And I do believe the reason we are all treated equal is because of the Monarchy system in the Kingdom of Thailand. Our recently deceased King (to me) is the nurture King, he understood and deeply cared for his subjects with the purest intention of improving the lives of all his subjects, rest in peace my King.

Email ThisBlogThis!Share to TwitterShare to FacebookShare to Pinterest
by Panu at 09:35
Labels: Sadness, Thailand