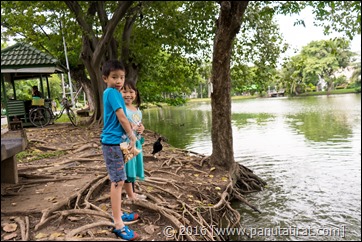 This past Sunday instead of the usual swim for us, and cardio for your mother, we had to change the routine slightly as your mother had a function to attend in the morning. It was a perfect chance for me to get rid of some very stale bread, so after dropping off your mother, us three headed to the Lumpinee Park to feed the fishes.

This time we also took a ball with us (in hope for a kick about), but it ended up wasting our time quite a bit, because it rolled down a steep bank and into the huge lake a couple of times... haa haa haa, I should have recorded Matt’s scream as us three stood and watched the ball rolled into the lake, lol.

But the fish helped up, they really did bring the ball back to us (I don’t mean in a Hollywood dolphin kind, lol), we’d simple threw the bread just a little beyond the ball, the school of fish hustle one another to eat the bread, creating waves and thus sending the ball back to us... actually the most difficult part is to pick up the ball whilst standing on a rather steep incline, lol. 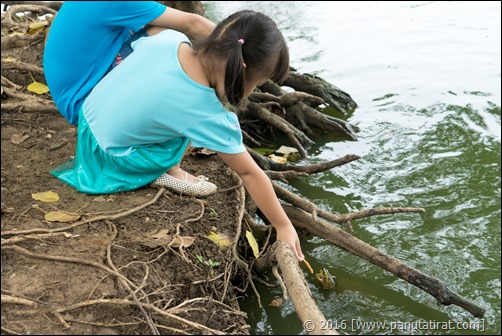 Apart from getting rid of almost a loaf of stale bread, we bought more (many more) bags bread cuttings just to feed the fish, lol, of course along the way bread fell on the floor, meaning we were feeding my most feared enemy,pigeons, by accident, which was very frowned upon by the keepers. Good news was that, the crows also came for the bread too, somehow they allowed Mar to get up close, close enough for the crow to take the bread off her hands, but when I’d try to do it, they all flew away. 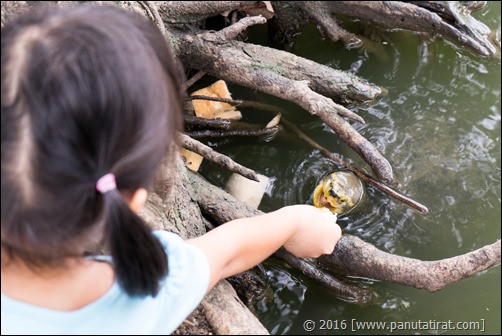 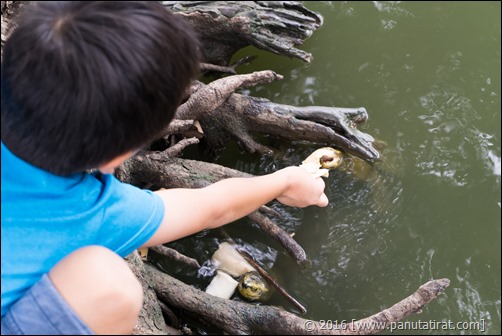 After a while, the turtles came, and for the rest of the morning it was all about the turtles! I was torn between taking photos and holding on to your clothes, as the last thing I want was to have you two falling into the lake.

After I had refused to buy any more bread (as we had already gone through probably 6 huge bags) it was time for a quick kick about... now that was fun and brought to light how unfit I am, lol.