Last Saturday [02.04.2016] we were invited to attend one of our friends’ ordination into Monkhood, to you he is uncle Niti :-) In fact your mother and I, uncle Chat, Uncle Niti and his wife Aunt Nate all worked together at BMW Thailand, we are very fortunate that we all just clicked, lol. Although all of us are no longer at BMW Thailand, but we still keep in close contact :-)

Unfortunately your mother had an event at work, so she could not join, but there was no way I was going to miss this, it is a real honour to have been invited. So all Saturday’s classes were canceled, and the three of us rolled out just a little after 07:30, the temple is in the old part of Bangkok, and I was convince I was going to get lost, lol. 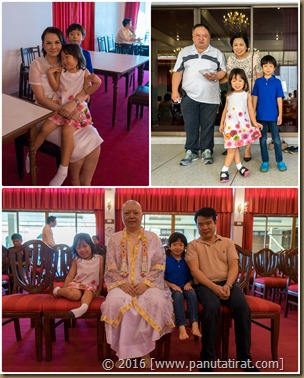 The temple we were heading to was Wat Benchamabopit, one of the revered temple in Bangkok, amazingly I didn’t lose my way, lol, and we arrived around there around 08:00. It was nice to see so many familiar faces, although uncle Chat, uncle Tong and uncle Big were running late. Aunt Ped and uncle Mhong were there even before us, and I handed off you two to them, lol, whilst I was off taking photos haa haa haa.  You two could not have been in better hand (these two are the kindest and most caring people I know) and you were more than happy to be sitting in an air conditioned room eating pla tong goh, haa haa haa.

When the ceremony was just about to start, Matt was suddenly pulled to the front and was asked to hold one of the candle and had to walk in front of the procession. After walking clockwise around the main temple 3 times, uncle Niti threw lots of coins (will try to find out why) to the crowd waiting below, then all of us were ushered into the temple for the final part of the ceremony, where uncle Niti essentially changed from wearing white to the customary orange, after which he was no longer uncle Niti, :-)

It was a great way to spend a grand Saturday morning… 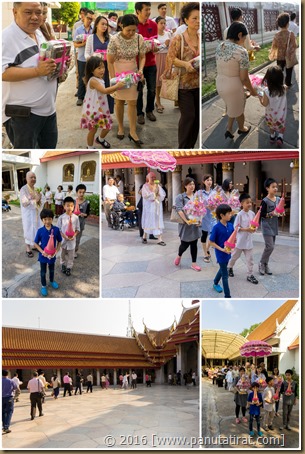 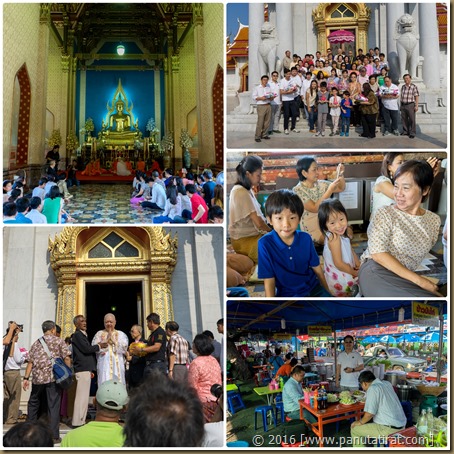