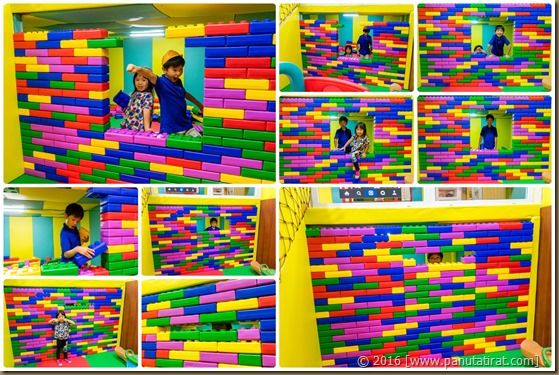 After the usual long and busy Saturday, your mother decided to go to The UP (Rama 3) for supper, supper was uneventful (just the way I like it), because we were at The UP you two wanted to go to ‘Monkey and Me’, quite a small place with a couple of trampolines and a few smaller play areas.

By that time I’d also had enough with just sitting around, so I’d decided to join in. This play area sits below another mezzanine play area, meaning there was a rectangular opening of around 8 or 9 feet, after using the few whole and half bricks, it was clear that I was going to be able to block off the opening perfectly with the bricks, and we had more than the bricks needed to achieve this awesome wall, haa haa haa.

After talking over the plan with Matt, you were absolutely up for it, haa haa haa, the pattern was a simple one, so Matt to charge of the left side and I took charge of the right, half way through we came to a conclusion that we needed a window... lol.