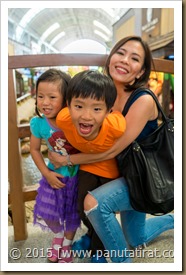 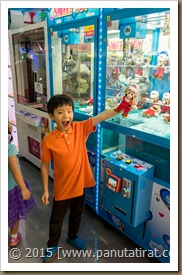 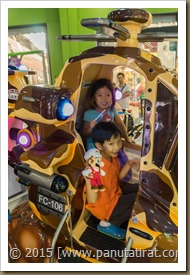 I think I had already mentioned this place already in an earlier post but didn’t have a chance to attach any photos, so here goes. I had just realised there are actually 3 of these, the one we’d visited being Paseo Park Karnjanapisek (as for the other two, I have no idea where they are, lol).

Definitely worth a visit if one lives near by, otherwise it is mostly same old content (shops) once again, but the packaging is pretty good, all done in Japanese style environment. It was much larger than I had anticipated, the open plan really helped it a lot, quite nice to have a wander around, and most importantly, there were plenty of parking, lol.

Matt decided to have a go on one of those claw machine with toys things, (wait a sec. let me google around for what I am trying to say)… Apparently it is named ‘Toy claw machine’, who would have thought :-) Anyway, with a 10 THB token in hand, and after walking all over only to settled on a machine with Mario… Totally beginner’s luck… managed to clawed himself a toy on the first try… judging by the scream, Matt was pretty chuffed, haa haa haa.