As you know I am currently working for a Telecommunication company, to be very honest we are more than that by a long chalk, with our portfolio I would prefer to call ourselves CommuniTainment (I don’t expct this term to be catching on anytime soon, lol). 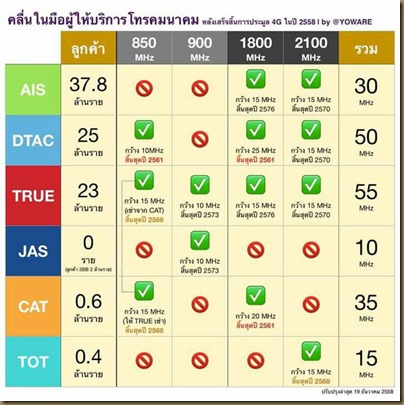 So the talk of the town lately has been about the bidding war for the 4G licenses, there were two separate auction one for 2,100 MHz and another for 900 MHz (with 2 liceses up for grab for each frequency), all in all the goverment made over 220,000 million THB, which was way, way above anyone’s expectation (apparently even broke the world record), and the consesion is for 18 and 15 years respectively.

The 900 MHz auction lasted 87 hours! Imagine all those executives had to be locked away incommunicado from the rest of the world for almost 4 days, I hoped they bought a change of clothes.

So how is the Telecom landscape now that the dust had settled… looking great for some that’s for sure, lol.

*I belive full credit goes to Yoware for compiling and making the graphic (no idea who he/she is) but it has been doing its round on the social media quite a bit.

Email ThisBlogThis!Share to TwitterShare to FacebookShare to Pinterest
by Panu at 22:01
Labels: Bangkok, BKK, Talk of the Town, Telecom, Thailand