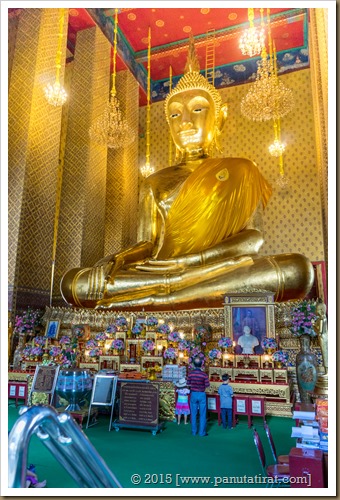 Unfortunately yesterday your mother had to work (Sunday 22.11.2015, your mother is facing a difficult issue at work at the moment, hopefully it all should be solved this week), so of course once again I was looking for help, haa haa haa haa haa.

We ended up having lunch with my parents at their home, then off we went to the temples, which after a dodgy start it turned out to be a fantastic day! By the way this was all planned the day before, we were to visit 2 temples along the Chao Phraya river, Wat Kalayanimitr and Wat Arun (Temple of Dawn). There are actually 3 main temples along the river in this area, the last one being Wat Rakangkositaram Woramahaviharn.

The first temple on today’s list was at Wat Kalayanimitr, a very important temple to the Chinese community, if we were to come here during the Chinese New Year it would have been more like a punishment rather than a boon, lol, just too many people. We have managed to park along the wall of the main temple, but my mother decided to take us for a walkabout, before circling back to the car and the temple, lol.

I was a little on edge (probably from the lack of sleep), and the overbearing heat didn't help, keeping the temper in check was a little difficult but manageable, especially when two monkeys were running around and trying to make the loudest 'gong' with probably the biggest bell in Bangkok, lol, you two had obviously forgotten that the temple is the embodiment of serenity and quietness. The possibility of being the first family in history, to be kicked off the temple’s ground was always on the back of my mind, lol. 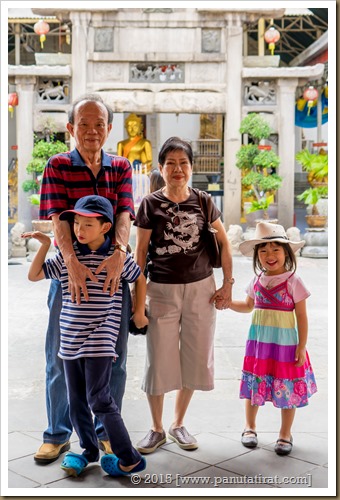 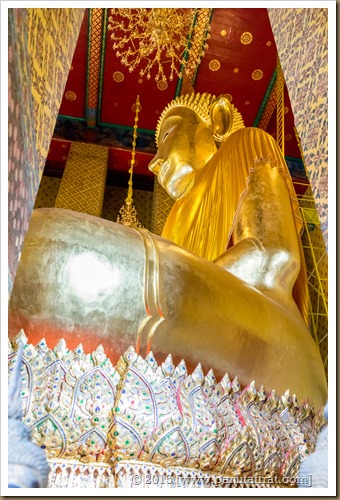 It must have been a very long time since I’d visited this temple, because my memory was lacking of any detail of ever coming here, but my mother had confirmed otherwise, so who am I to argue... lol.

Next we were off to Wat Arun (Temple of Dawn), this is probably as well known as the Wat Phra Kaew, but after we were back on the road, we began to notice a whole lot of policemen and soldiers dotted on either side of the road. Then it dawned on all of us that today was the rehearsal day for the ‘Bike for Dad’ event.

Wat Arun is probably less than a kilometre away, but the parking is rather limited, in fact it was so limited that we couldn’t find a place to park, lol. We almost cancelled the rest of the day, the threat of being stuck for hours somewhere when they close the roads for the ‘Bike for Dad’ was just something we were desperate to avoid.

After driving a lap around wat Arun, we decided just to go home, driving deeper along Arun Amarin road looking for a place to make a u-turn we drove pass Wat Rakangkositaram Woramahaviharn, now this temple I do remember, it was like our third home, lol. My father has given me a Buddha Amulet from this temple many, many years ago, and I have no doubt that by the time you are reading this post, I would still be wearing them around my neck, :-)

Mother old me that they have now constructed a multi-story carpark to accommodate the demand of the worshipers, that was I wanted to hear, a place to park, haa haa haa. On a whim we turned into Soi Wat Rakang, and tears were free flowing down my face, the carpark was beautiful, haa haa haa haa haa. 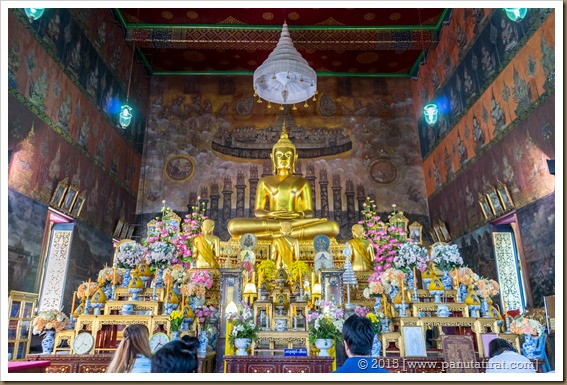 It brought back so many memories, Wat Rakang had changed a lot, but I could still remember various bits and pieces. With time on our hands, mother decided to give Wat Arun another go, but this time we caught the boat (this boat, all it does is do loops around the three temples).

By boat it took us less than 5 minutes to arrive at Wat Arun, apart from the main temple with Buddha’s relic, there was also a shrine of our beloved King Naresuan (reigning over Ayutthaya, when Ayutthaya was Thailand capital city). There was a platform that King Naresuan uses regularly to govern the country, and it was supposed to be good luck if one crawl underneath it. 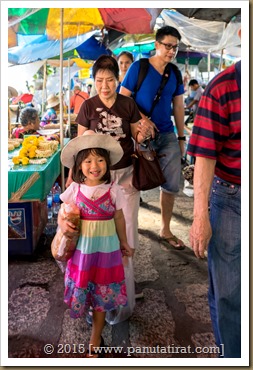 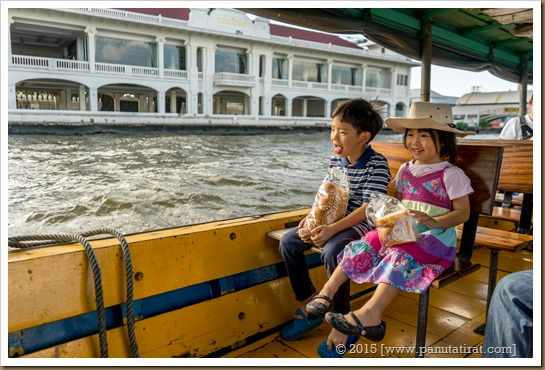 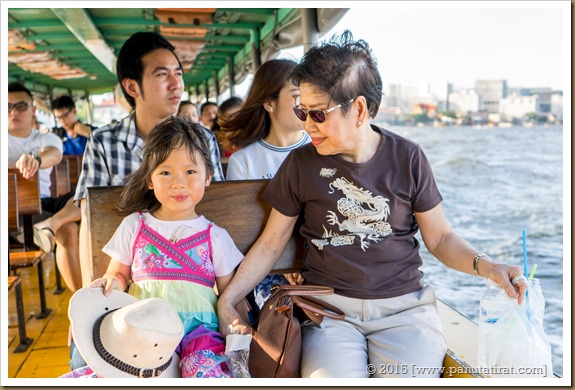 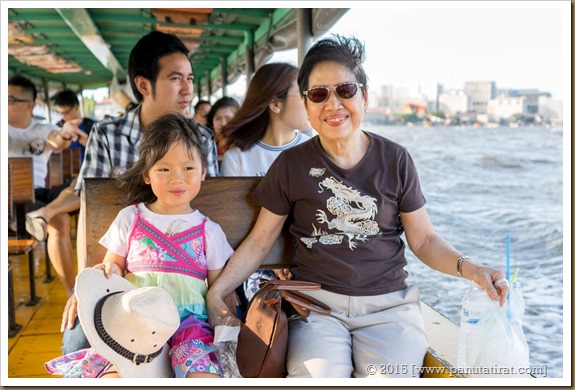 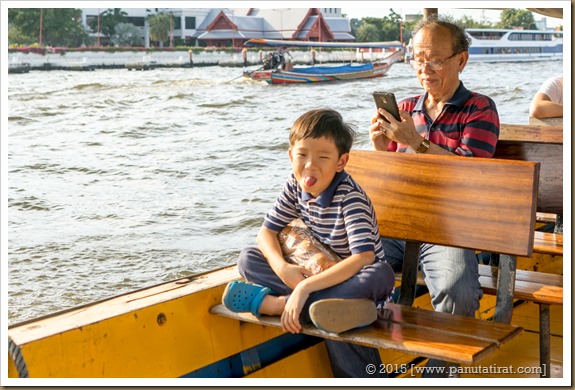 Your grandfather’s eyes were as sharp as ever, as soon as he saw the platform (at least 2.5 metres in width) he signaled to Matt to crawl under (the gap from the floor could not have been more than a couple of feet), of course Mar was not far behind... haa haa haa. 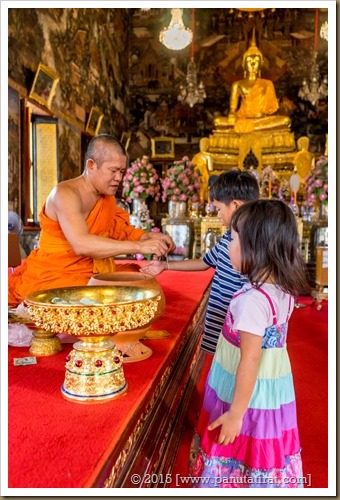 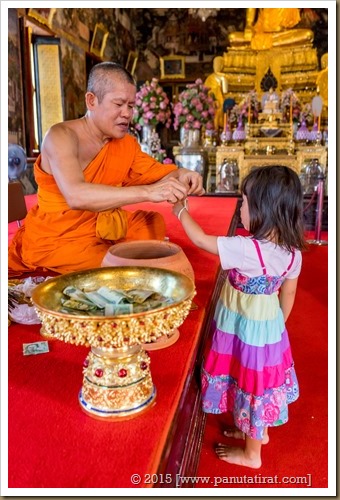 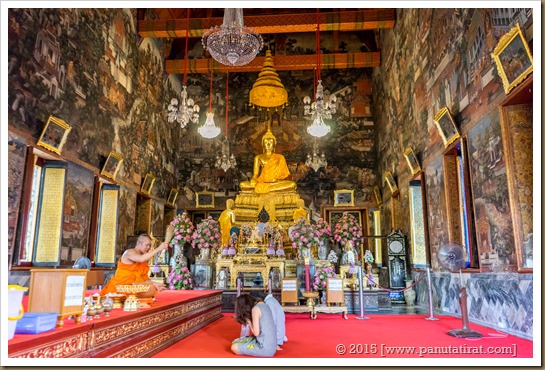 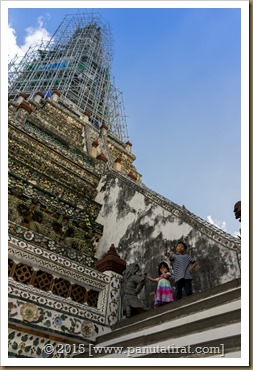 By the time we caught the boat back to Wat Rakang it had already gone five (the last boat was at half past five), two very tired kids were glad to be back in the van, haa haa haa, but just as we were leaving the parking spot we were told to shut off the engine, the ‘Bike for Dad’ rehearsal was in full swing and the road was blocked off for another one of two hours! 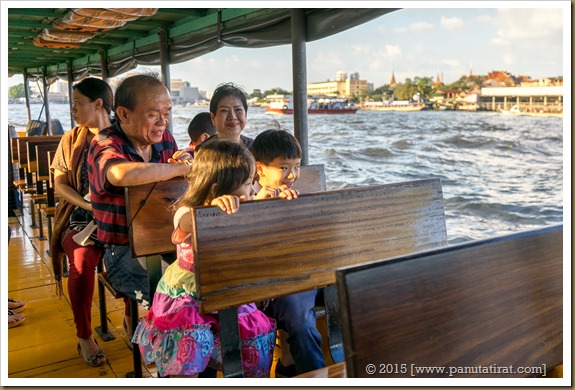 Cutting a long story short, we were only inconvenient for about forty minutes; after dropping off my parents we headed straight for home... What a wonderful (tiring) day :-)