Before I catch up on a few posts, just wanted to say the hunt for Matt’s piano is finally over :-) At the end of the previous post I said I was going to go for the Roland 504, well, I’d actually found a retail shop that has them in stock. I had even went to their showroom to see it in person (the sales person was a bit cold in his conversation and I really didn’t like it too much). 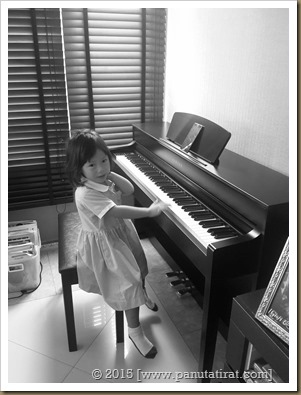 Then a flash of thought came across my mind, Roland in Thailand to my knowledge is being imported by a company called Theera Music, they are the officially appointed distributor for Thailand, quite a reputable company. But Roland isn’t that popular in Thailand, it is like buying a grey imported car, what happens if one needs to fix it, it could happen. Will they have the correct parts, will they have a masterful mechanic with the right ability to fix it?

So with that in mind, I’d went back to do some more research on Yamaha, which is by far the most popular brand in Thailand, the importer is super well known and has oodles of Yamaha music school nationwide. In short they are just a much bigger group. After the research, the model that I should be hunting for was CLP 535.

Now your mother came into play, she had really wanted to get one for Matt as soon as possible and she had been ever so patience with me and my silly research. Now that we had a target and after some ringing around and talking to her friends, she was recommended to visit a Yamaha shop at Siam Paragon. Long story short, it took us an awfully long time to find the shop (it was in the Education Zone, which for me would have been easier to find Nania in a warehouse full of wardrobes). Ended up with quite a good deal, and finally it was delivered this very afternoon (the same day as my return from Ho Chi Minh (another post in the making)).

Of course the first person to have a go was our boss, Mar, lol.