The great hunt: Digital Piano and a Violin 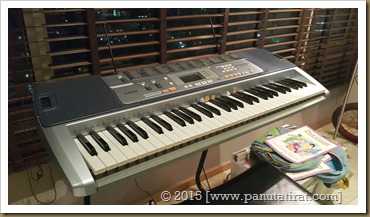 The time has come, Matt finally needs a better piano, so far you have been practicing at home on a very simple keyboard, really nothing more than a glorified toy. You have progressed so far and soon you’ll will be using the paddles. I still find it amazing that you can read the notes now, to me it’s nothing but a bunch of tadpoles wriggling on a piece of paper.

The same for Mar, it was also time for you to have a violin of your own to practice at home, not sure if the violin will come with earplugs though, haa haa haa, only kidding :-) Actually the teacher has been quite impressed with your progress.

I have as much knowledge of music and of musical instruments as much as Mussolini knows about being humble. Of course I don’t want to let you two down so begins my journey into the unknown (literally). 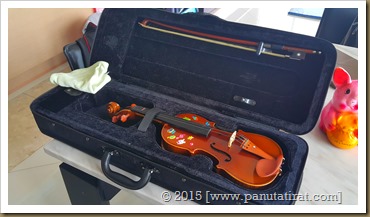 Choosing Mar’s violin was a bit simpler, as this was your first violin, so we popped over to a pretty good music store, the guy there was excellent, he took one of the smaller violin off the rack and started measuring your arm against it, it was a size 10... Ka Ching... done… haa haa haa.

Now, Matt’s piano was a totally different story. When we had decided to get you a proper piano (88 keys, touch and tone), your mother called up her friends who were music teachers, and got a pretty good deal on a vertical acoustic piano. But after I did some research, having an acoustic piano in the apartment could pose some issues with the neighbours, lol.

So I have decided to go with a digital piano and really didn’t even know where to begin. Googling seems a pretty good start, so I began to read and read and read, jumping from link to link. After about a week, it was all down to Yamaha, Roland and Kawai.

Then it was all between Roland and Kawai, for me it was no different than in choosing a car, lets say BMW Vs Mercedes; 3 Series Vs C-Class, 5 Series Vs E-Class and so on. So for Roland I was looking at F140r/F130r and I am assuming that would be in the same class as Kawai’s CN series (of course I could completely be absolutely and utterly wrong).

Time to see the real thing, on a quiet Sunday afternoon, all of us visited a Kawai shop (@ Central World), and the staff there was great and very helpful, whilst I talked Matt was having a go at all of the pianos, of course the one that he liked the most, was 1.6 million, haa haa haa, time to leave.

Even after a week of on and off research, it still felt like I was going into this half blind. So back to more googling I went, best decision everrrr... wow, found this web site, http://azpianonews.blogspot.com, it was absolutely superb! Exactly what I was looking for, no nonsense opinions and insights from someone who knows.

At the end of the day, the main variable for me was the ‘Touch’... everything else comes second, and after reading all of his (Tim Praskins) reviews, I have now set my mind on a Roland HP504 :-) finally I have a target.

After looking at the price on the net, it was a little high, but still within budget :-) Now lets see if one can find a good retailer :-)