Your summer holiday is coming to a close, and we have just realised that Mar hasn’t been anywhere yet. So for the final weekend of the holiday, we’d decided on a whim to spend a weekend in Pattaya. Frantically we looked for a hotel, and finally we had come to a conclusion that the best variable in choose a hotel, is the pool, lol.

Going back to Pattaya has always been Mar’s consistent request, for several weeks she kept mentioning ‘I want to go to Jungle house’ of course that meant Villa Wanida (loads of trees), but your mother and I needed a change. After looking at the pool (mini water park) there was no other choice, and I knew that you two would love it, so off we went to Mercure Pattaya Ocean Resort. 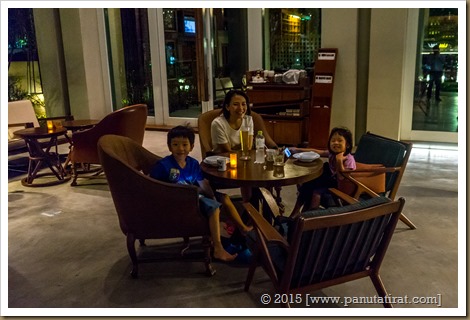 Setting off on the Friday afternoon was a bit of an affair, we were supposed to have been on the road by 16:00, but your mother didn’t turn up until 17:00... lol. Anyway, to be honest I was a little annoyed, but she had work to do, what could you do :-) Luckily I’d bought some BBQ pork and sticky rice for the journey, then realised I hadn’t bought anything for your mother and I.

It was lucky that you two woke up as soon as we’d pulled up at the hotel, if you remained asleep it would have been one boring night for us, haa haa haa. We threw the bags in the room and headed off to the nearest bar/restaurant :-) Let’s say it was a rather good night, lol, and you two were full of energy.

Nothing else was on the agenda apart from the pool, pool and more pool. The tiny water park was perfect, there was also another conventional pool on another floor, meaning all the children can be as noisy as they want without disturbing the other guests. 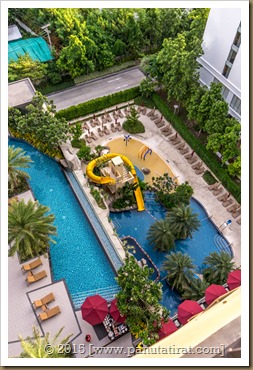 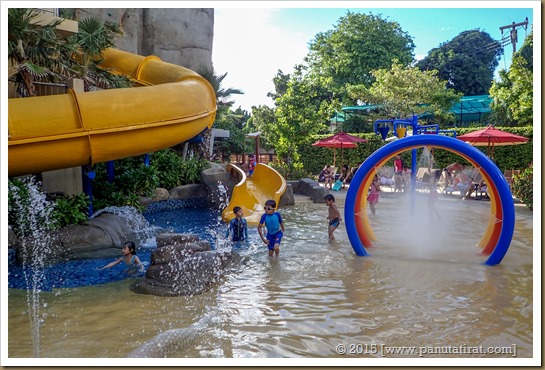 I think the water park is good for kids up to the age of around 13 or 14, the 4 metres diving spot was great fun. I was surprise that Matt had jumped off without an ounce of hesitation... Me on the other hand took a little longer, lol. The thing is, looking up to the diving spot, it really didn't look that high. Actually it looked rather 'pedestrian', haa haa haa, until I was on top looking down onto a 3 metres deep pool... One might as well be jumping off mount Everest, lol.

The first jump of many…

The single real water slide was crazy, it wasn't long, but somehow they have managed to get rid of friction. Coming down the slide, the speed for a portly person like myself was definitely breaking the sound barrier, the sonic boom was coming left right and centre.

The 'toddler' slide was the same thing, it was around 3 metre in length, bright blinding yellow and set with a very shallow incline... I mean really shallow... But Mar was whizzing down it like a bullet train on a free fall, haa haa haa.

Just too much, lol.

Unfortunately we were witnessed to an accident, a young mother was carrying a toddler (probably around 2 years old) on her shoulder whilst standing on the toddler slide. As she took her first step, she had lost her footing and had fallen backwards, her boy’s head must have banged against either the floor or the side of the slide. She looked in shock and the boy was bleeding from his left eye brows.

The rest of their family very quickly gathered around, as they were Chinese your mother jumped in and helped to call the lifeguard to quickly come with first-aid, later I saw them all smiling in the lobby, so nothing worse happened. 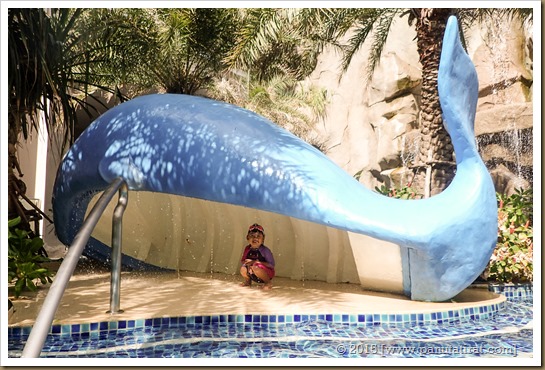 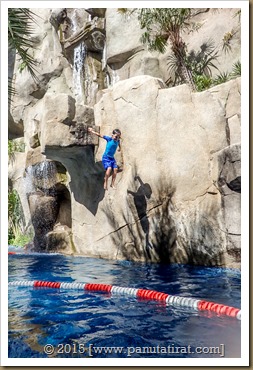 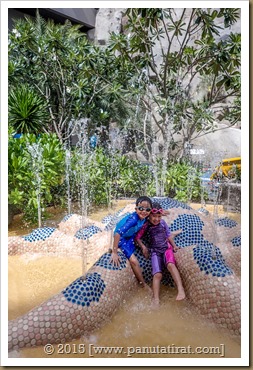 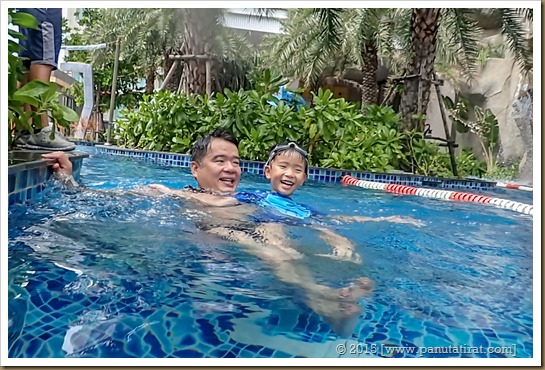 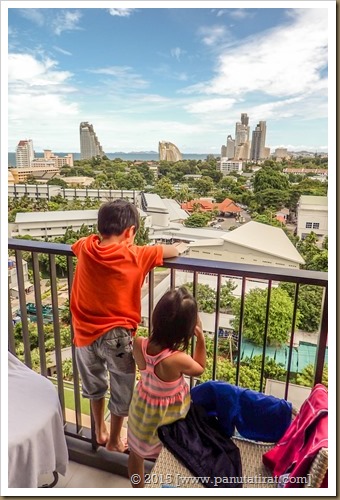 Lunch was taken not too far from the hotel (Sanctuary of Truth, I was so glad to be out of the pool away from all the jumping and the sliding, lol. We had to come here because of Mar wanted to feed the rabbits and the goats, haa haa haa.

There was no surprise that by the time we got back to the hotel, both of you were out of it and so were we, lol, climbing onto the bed with a full stomach was an absolute bliss, lol. I had no idea how long had past, when I suddenly jolted up only to be met by Matt, staring intensely at me (perhaps that was why I had jumped, lol.). All I could say was ‘another swim’, the answer came in the way of a huge smile... So off we went, leaving Mar and your mother in dreamland.

The jumping and the sliding didn’t get any easier...

After an eternity, I’d looked up from the pool to see your mother and Mar waving madly at us, great an excuse to be out of the pool, haa haa haa. As usual we were going to have supper at uncle Chat’s house, Mar couldn’t wait to see Gun and Jan, as well as the dogs again. 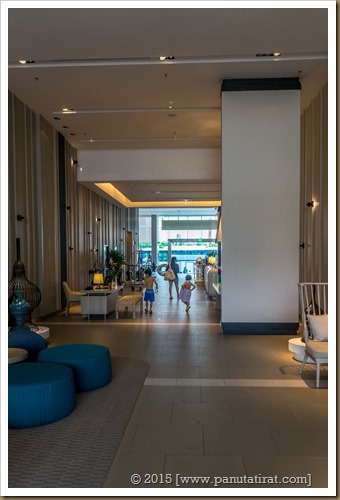 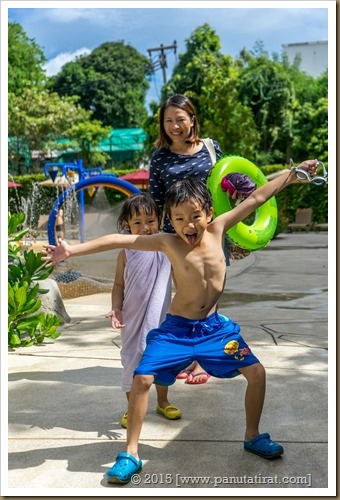 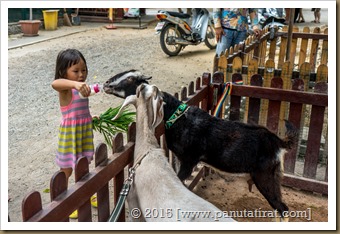 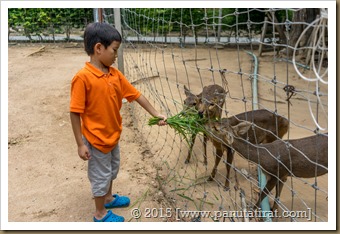 All in all the first day went far better than I had hoped, the mini water park really hit the spot with Matt and Mar, and that was all we had cared about, this weekend was purely for you two after all. Forgot to mention about the kids’ room, a rather small room, but full with toy and a couple of computers... another great way to keep you two busy.

Can’t believe it was time to go home, after an early breakfast, just have a guess where we ended up? Don't know if it was me, but the pool felt especially cold, which made it even worse, haa haa haa haa haa. 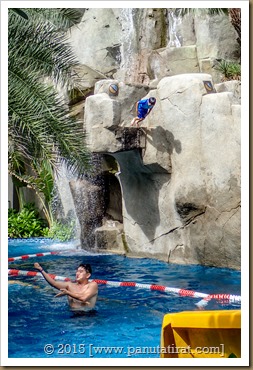 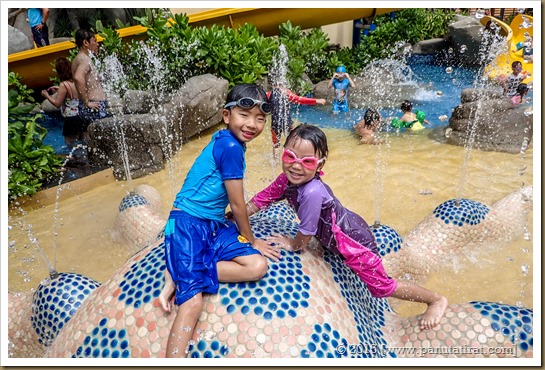 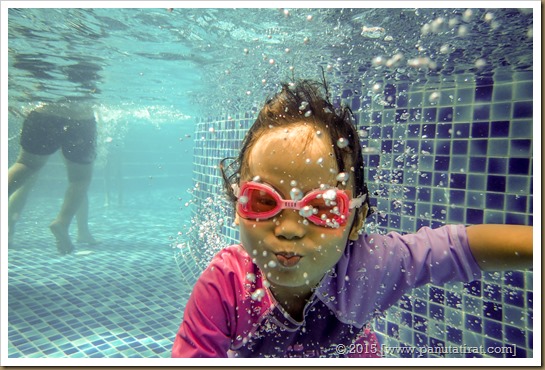 At noon, checking out was uneventful (which was a good thing). The plan was to visit one of the local zoo after lunch, but it didn't work as plan only because you two decided to sleep all the way back to Bangkok.

We are definitely doing these type of weekend trip again, you two had a great time, and so did your mother and I, lol.