He wanted a PlayStation 4. 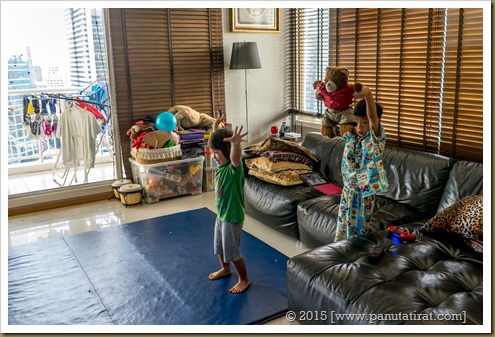 Several months back Matt had already told us what he wanted for his birthday, and he was so adorable... he wanted either a Wii, XBox or Playstation, whichever is the cheapest... haa haa haa.

In terms of appropriate gaming (your age) I was going to get the Wii U, but believe it or not, these are quite hard to find in Thailand and even more difficult to find the games. So Wii U was struck off the list, with only PlayStation or Xbox remains.

So when Matt said he wanted a game console I had literally leaped over the moon (but I hid it really well in front of your mother though haa haa haa), because this time no excuse was needed to be given to your mother lol. The choice remains were either an XBox One or PlayStation 4, and the seesawing of decision truly started.

PlayStation was the first in mind, the XBox took over because it was more of an all around box, this went back and forth for over 2 months, at the end it just came down to the retail outlet, both XBox and Wii U has no official retail outlets but are both distributed through dealers, which are often, look as trustworthy as a Del Boy wearing a clown uniform whilst smoking a big fat cigar, standing in a dark alley on a moonless night and trying to flog you a brand new briefcase from Czechoslovakia (especially when this country doesn’t exist anymore).

Sony on the other hand has their own official Sony stores dotted all over the place, of course the console is a little more expensive here (than buying from the dealers) but with a certain credit cards one can split the payment into 4 months installment at 0% interest, quite handy.

After a little research, XBox One console can be found easily enough but the games are not as abundant as PlayStation 4’s games. In the past these consoles can be modified to play illegal bootleg games, but for the current PS4, it will only play official legal games, and these can be quite expensive between 1,500 - 2,000 THB per game (I am completely behind buying the legal version anyway). Besides, with internet connection one can always buy and download games from the Net (assuming you have already set up your PSN account).

Several days later I’d returned to pick up the PS4 Camera, and to my surprise I’d found out I have collected enough points on my reward card so I had to pay absolutely nothing for the camera (over 2,500 THB) :-)

Matt wanted ‘The Lego Movie’ game, but those were no where to be found, and I wanted a disc version so that Matt can play it straight away rather than having to wait for the download, so had to settled for ‘Lego Marvel’ game... to me a much better game, lol.

As for myself I had really wanted to try the PSN and their payment system, and decided to buy a game call ‘Styx’, the name does not by any mean represent the quality of the game, haa haa haa. After creating a PSN account via a browser (Chrome), the rest was as easy as eating an ice-cream on a hot summer day. The PS4 connects to the home Wi-Fi effortlessly, signing in was as simple as ABC, buying and downloading a game was ‘frighteningly’ easy... push a few buttons and Sony was sucking my money right out of my pocket (willingly on my part, lol).

But for the PS4 to be more fun for you two, I had to get the PS4 camera, the ‘Playroom’ games were mesmerising, but I am easily entertained, just ask your mother... haa haa haa, can’t wait to download ‘Rabbids’ tonight... lol.