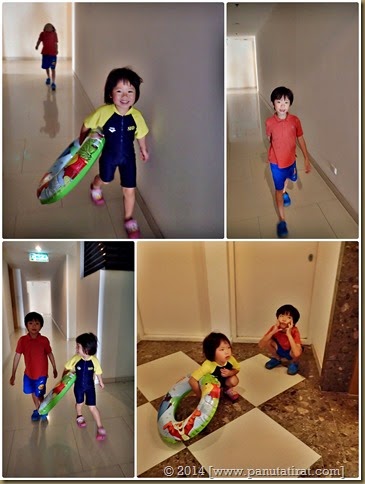 Today was the last day of a very long Songkran holiday (Thai New Year), but your mother was busy with the opening of the latest ‘Virgin Active’ in Bangkok, it is probably the biggest club for Virgin in Southeast Asia (not that there are many of them, lol), so we can understand why she would be swamped with work.

So you were left with me... haa haa haa, started off with a huge swim, then a quick visit to your mother at the club, but instead of driving I thought it would have been fun to take the BTS (Sky Train) to Emquartier (Where the Club is).

Walking around the latest ‘shopping mall’ was fun, but the novelty runs dry pretty quickly, at the end of the day it is the same old, same old tenants! Of course there were some new brands, but synonymous with anything new in Thailand are the long queues, lol. Standing in line for food (often for more than forty minutes), where there are hundreds of other places that you can pretty much sit down straight away, to me just represents time not wisely spent. 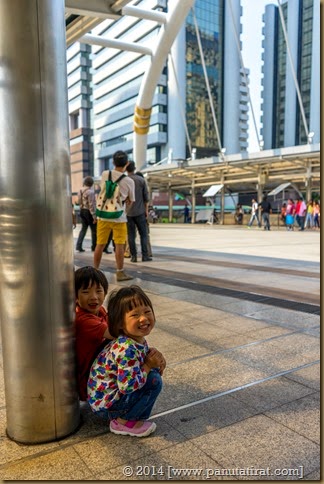 If I was to die tomorrow, trust me, I am not going to regret not eating that chicken (the size of one’s head) at Emquartier just before I kick the bucket and walk into the white light, probably I would be more regretful that last Monday I took a left turn rather than a right and was stuck at the red light for more than 3 minutes.

On the way back, we saw an Indian film crew shooting on the overpass, after quite a long walk it was time for a break anyway, so we stood by and expecting to see some magic. Obviously movie magic doesn’t happen behind the cameras, haa haa haa haa, must give them credit though, the heat was unbearable and yet they were still able to smile through out a running and dancing number :-) blooming mad to be prancing around in that heat…

Email ThisBlogThis!Share to TwitterShare to FacebookShare to Pinterest
by Panu at 21:39
Labels: Family, Family Life, Holiday, Marcella, Matthias, Panop, Pasuree, Time with me