Only one day after our ‘almost horrendous’ holiday, we were once again leaving BKK behind in the dust (which always bring a smile). This time we were heading to a small restaurant in Samut Songkram province (probably a 100 Km drive). 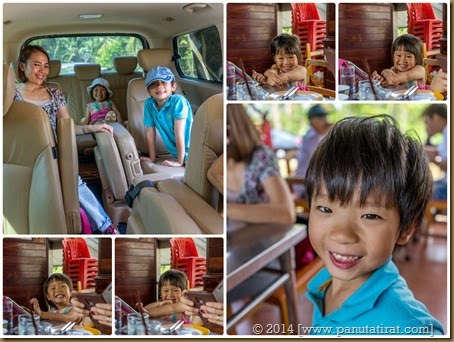 My mother, who is always on a hunt for great restaurant, found this one mentioned in one the leading newspaper, apparently one of the princesses had also visited here, and that of course is always a good sign. I mean, there are several ‘official’ recommendations such as ‘Shell Shuan Shim’ and so on, but those are not always reliable, but if one of the royalty happens to have eaten there, there is a 99% chance that it will be a good one (and almost always they will be very affordable for the average normal subjects, like you and I too, lol).

Thanks to Google Map, I’d only made the one wrong turn and that was quickly fixed, if I was driving unaided, trust me our so called ‘Lunch’ would have turned into a very late ‘Supper’, haa haa haa.

I was so over the moon that Matt is on his way to recovery (in the photo he still wasn’t looking his usual self), during the past few days it has been pretty much a nightmare for him, and us too :-) but it is all behind us now. Lunch was lovely, I am not much of a foodie, but to see my mother and aunt having a fantastic time was enough for me to be very contented and to call today, another one of those good day :-)