And what a storm that was... your mother and I were totally stressed out... 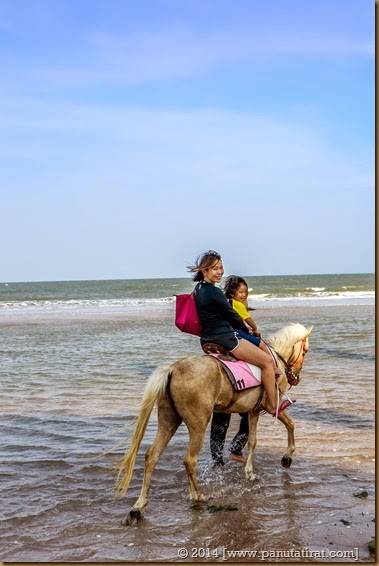 Friday morning started as normal, but Matt was out of it, not because of the pain but because he literally had not had a good night sleep for the past eight days, and your mother and I just so overwhelmed with worry we can not described how terrible and helpless we were feeling.

And for the moment I thought it was a terrible idea for coming to Huahin, but as it turned out it was the best move ever!

Matt went through the whole day extremely lethargic, to the point that he asked to leave the pool and to return to the room. I couldn’t go because Mar was still full of energy and wanted more time in the pool, so Matt went with your mother to the room.

Supper was taken outside of the hotel in the town of Huahin, the food was nice but as the late afternoon turns into night the cramp was back for Matt, and once again your mother and I were prepared for another restless night.

By around nine pm Matt was screaming in pain and doubled over like a tiny woodlouse. There was no way we were going to ride this one out, Matt had already taken several medicines (from BNH) and he was still in pain. I put my shorts over my pajamas shorts, threw on a shirt and in a second Matt and I was in the van driving to the hospital in the town.

All the while Matt was scream in pain on the very back seat, and I was driving like a maniac to the hospital. Once again I found myself carrying Matt into the emergency of Bangkok Hospital (BKKH). Instead of the inert reaction that we were getting at BNH, to me BKKH was fantastic, the nurses were alert and soon the Dr. came to visit.

After a short conversation a couple of meds were administered, one for the cramp and one for the pain, soon Matt was in a calm state. After Matt had settled down he was sent for an x-ray.. The emergency Dr. said if Matt remained pain free then he would be allowed to return to the hotel with me, as the x-ray was fine, if not that they will have to do a CT scan.

I could not have been happier to hear the words x-ray and CT scan, as no analysis had been done throughout the past eight days of nightmare. After almost thirty minutes I came back to the emergency, expecting to see Matt fast asleep, but instead Matt was once again crying in pain, more medicine was given and an enema was administered and while this was going on the nurses were getting ready for the CT scan.

This was my first time ever to be near a CT scan machine, actually quite intimidating to say the least. Matt was acting like Champ :-) and after fifteen minutes the whole ordeal was over, all we could do now is to wait for the results. Because this was at night, the scans had to be sent to BKK where there is an expert on standby to analyse the scans (apparently over 100 pictures). 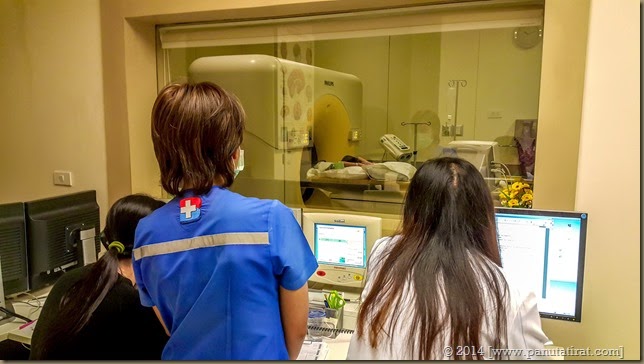 By this time it was already almost eleven pm, but the analysis came through soon enough, by around eleven thirty it was cleared that where Matt’s small intestine joined onto the large intestine was blocked, and there was no way any enema could reach to the depth. All they can do is to administered oral medications in hope to clear the blockage.

Just imagine if we hadn’t come to Huahin, you would probably had gone back to BNH to face several more nights of agony… This funnily named ‘Bangkok Hospital’ (but in Huahin) has all the equipment which I don’t think the much more expensive BNH has. So it was the right decision to come to Huahin (but for a totally different reason) after all, lol. 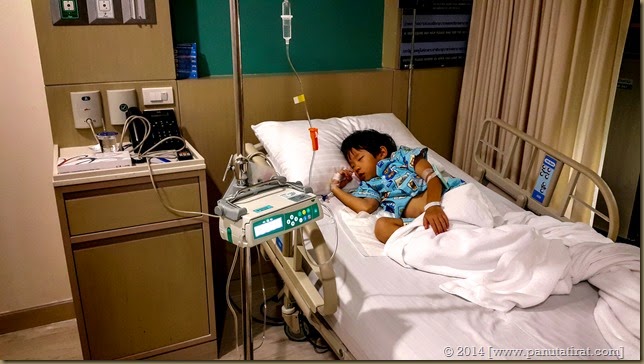 Now I have a list of the medication somewhere, anyway, around one the morning you were in pain again, and more medication was given... and that last bout seems to did the trick, as for the first time in so many days you slept soundly from around two to around seven... no words can describe how I’d felt to see you soundly asleep.

By the way, your medications were disgusting... I tasted all of it before hand, so thumb up to you champ for drinking it all. 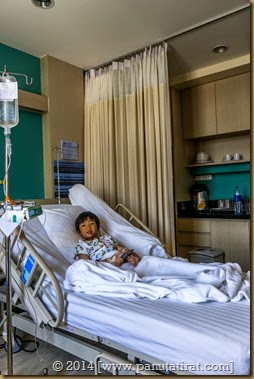 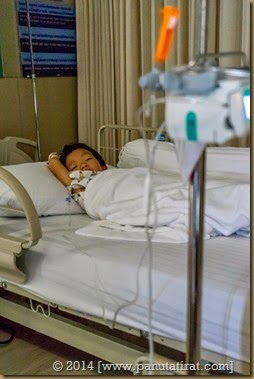 Yipppp ppppppeeeee, you woke up all smiling... It’s Matt 2.0, haa haa haa haa haa. All the medicines you took the night before started to work, in that I mean 8 visits to the toilet (for the whole day) seems like a good indication that the meds were working.

At least your pain had gone (apart from a few minutes of discomfort now and then). With all the lack of sleep you’ve been having, it was no surprise that after breakfast you fell asleep once again until I had to wake you up at two pm.

The night was a good one, fell asleep early and slept soundly throughout the night (for the first time in nine days, a full night sleep).

Of course all this time your mother and Mar was having a great time, swimming, playing in Kids club, drinking wine and generally having a laugh... oh, I am kidding, your mother was more worried than anyone.

Came Sunday morning, the Doctor gave you the all clear :-) and by the time we’d arrived back at the hotel, it was time for checkout... haa haa haa haa haa. So Matt and I literally spent more than half of the holiday in the hospital :-) well that means nothing, all we know was that Matt is now truly on the mend :-) There will be other holidays...

But things were just about to get from better to fantastic, during our checking out your mother decided to message our old friends and they were in Huahin too (they have a house) and so we decided to pay them a visit. They have a twins just a year older than Mar, with hindsight we must thanks uncle Mai and auntie Ann for literally rescuing our holiday… haa haa haa.

To our surprise, there were two other older children (around Matt’s age) from our friend’s cousin who were visiting as well, so as a final count there were 6 kids in all, what a party... Everyone swam in the pool and sea, played in the sand and loads more activities. 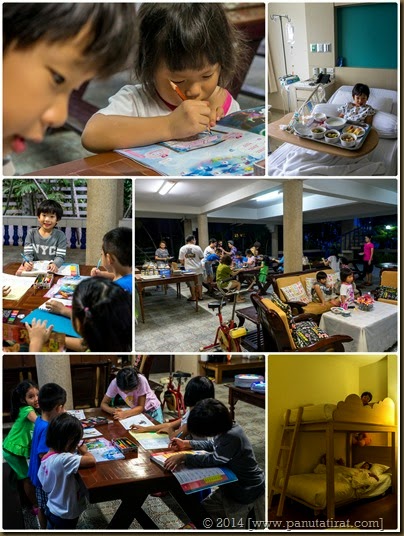 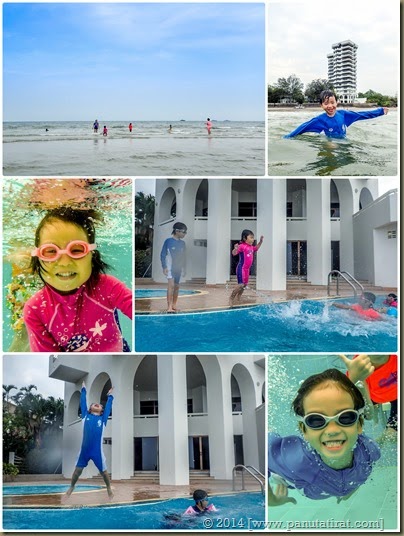 It was so much fun that it didn’t take too much convincing for us to stay another night, and your mother did an amazing job to find a room at Ibis :-) Of course you both loved the hotel, it was so good to see Matt back to being a little monkey again.

Of course you two loved Ibis’ bunk beds, haa haa haa, and as usual you were up way before the sun rises, lol. The hotel is new, clean with absolutely no frills, lol. I’ve been in a few Ibis during the various business trip and this is exactly the same standard, small, clean and very functional room.

But we had to leave early to pick out a couple of presents for the twins’ birthday, then we headed to Uncle Mai’s and Aunt Ann’s house once again. I can sum up the whole day in three words... fun, fun and more fun, haa haa haa haa haa.

As this was Songkran, it is a tradition to present to the elders of the family some garlands of flowers and to run water/incense over their hands and ask for their blessing. 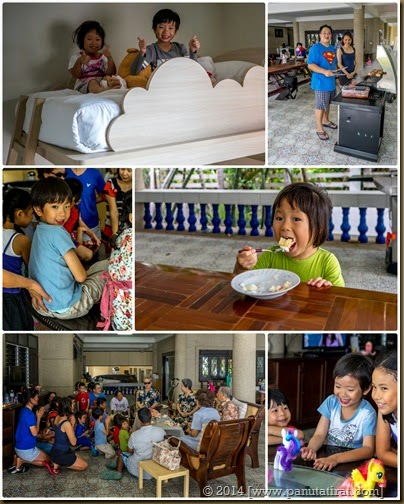 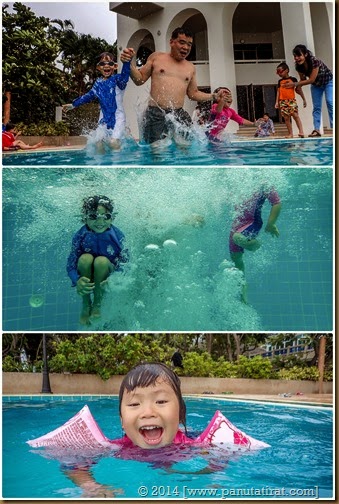 By the time we looked at the watch again it was five in the afternoon... and this time it was really time to go home. I was so glad we had these couple of days of fantastically fun time for the both of you, otherwise if we had gone home on Sunday, this holiday would have officially been totally sucky... haa haa haa. But as it has turned out, it was one of the fun time we had.