Most excellent time in Rayong :-) 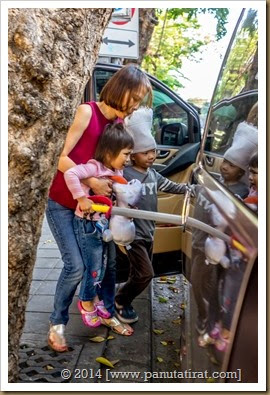 For the longest time my father had mentioned about this temple in Rayong that he wanted to visit, but just couldn’t fit it into his schedule. Then came the end of 2014, this year my parents decided to stay in BKK  and so were we (as usual).

A couple of days before the final day of 2014 we decided to make the trip and visit the Temple, Wat Lahan Lai. At first I was looking at a day trip, but your mother decided it would have been safer just to somewhere basic and stay overnight (especially with my driving, lol).

A thousand points to your mother for being able to find a hotel for 7 people so close to the New Year, lol. The morning of 31st Dec. came soon enough, without any breakfast we all piled into the van and set off to pick up my parents and aunt, lol.

For the life of me I can not remember when was the last time I’d spent an overnight trip with my parents. I think I was more excited and worried than anyone, excited because I get to spend time with my parents (however I think they were more excited because they got to spend time with you two, lol), and why should I be worried? Oh, just small matter of finding places to eat, and why should I be worried about that? Oh, just a small matter of pleasing my parents, especially my mother, lol, oh you’ll find out when you are old enough.

Day One - The Fun Begins

Driving to pick up my parents and aunt was a breeze, BKK roads on the final day of any year is like Heaven wrapped up in Belgian chocolate, deep fried in wafer thin batter and seasoned with icing sugar from paradise.

Finally all of us were together, and around nine o’clock the wheels once again turned, pulling us Southeast towards Rayong. Earlier I’d mentioned none of us had any breakfast, that was because knowing my mother she would have come prepared, especially with you two in tow, lol. Once again it was beyond my expectations, we could have gone away for 3 more days without visiting a restaurant judging by the amount of food she had prepared for breakfast... haa haa haa, and we ate every last bit of it... :-)

My plan was to drive straight to Wat Lahan Lai, that why it was so important to leave BKK round nine., with my impeccable driving skills we were sure to be slower than average, lol. The drive was certainly uneventful (apart from a couple of emergency bathroom stops, lol.). 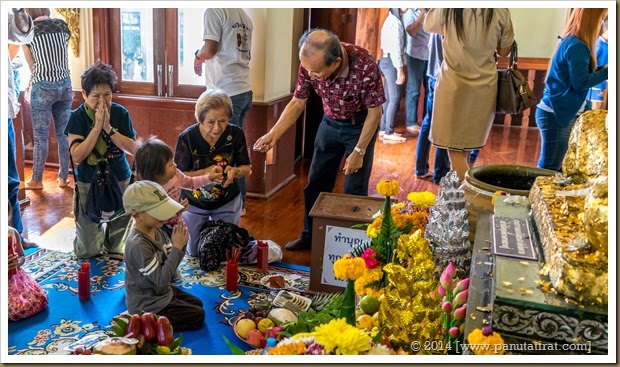 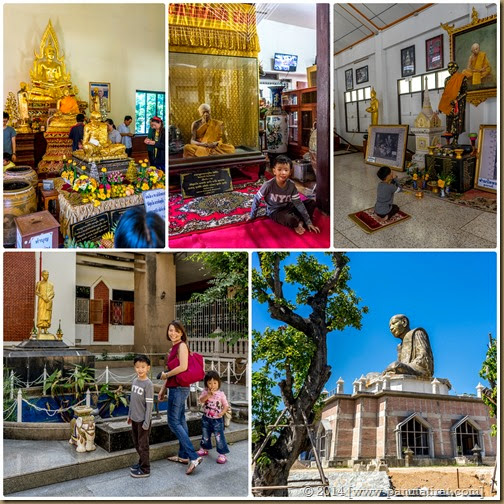 It had just turned eleven when we rolled into Wat Lahan Lai, I was so glad to have this opportunity to bring my father here, and it is always fun to come to visit new places. Paying homage, prays and making donations was fulfilling, my father made sure that you two were fully involved in all actions. and interactions.

Soon it was time for lunch, and what would we do without the Internet... “Places to eat in Rayong” please Google... and 0.27 seconds later came a list longer than the wall of China. Your mother once again recognised a name, I also overheard another family mentioning the same restaurant, how can we go wrong? Haa haa haa.

We headed towards ‘Tamnan Par’ (Legend Forest), probably one of the most well known and oldest restaurant in the area (now they have added a resort to it). I could tell this place was popular just by looking at the size of the place, there must be at least 700 seats or more, and to call it Tamnan Par was absolutely perfect, this place has more trees than Taiga.

I could tell my mother wasn’t impress with the taste of the food, lol, and to say I wasn’t surprised would have been a real understatement, haa haa haa, at least the ambience was great, plenty of fishes for Matt and Mar to feed, the trees and foliage kept everything nice and cool, most importantly the place was really clean and in top shape. 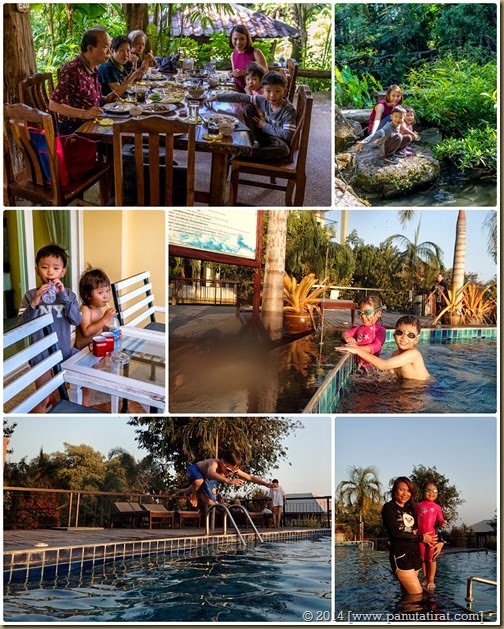 Next was the hotel (Royal Cliff Phala), I am in safe zone here, it was just a place to stay for the night, and to have found an ok hotel with rooms available was already a boon, I was more worried about getting there quickly so Matt and Mar would at least have a couple of hours of pool time.

The reviews for the food at this hotel were the worst we have ever seen, haa haa haa haa haa. The pool was rather nice though, Matt and Mar had a fantastic time (all the while being watched from afar (balcony)). Since early afternoon my mother had come down with a heavy bout of allergy, so by the time supper time came she was pretty much out of it and all wrapped up in thick clothes (the weather had suddenly turned cold, oh, one more thing, Mar fell down a couple of steps apart from a few tears it was fine, lol, totally my fault though).

She suggested to eat at the hotel, suddenly all alarms were ringing (in my head), luckily your mother came to the rescue (again), it was totally out of the question to eat at the hotel and she had already found a seafood restaurant not too far from where we were, as it turned out, it was the best move of this trip :-), thanks Gio.

‘Tarn Koo’ (Palm Pair) is a very local seafood restaurant, and these are always the best, the notion of a restaurant in this case consists of ten or so tables with the night stars as our canopy and the beach as our main view, the kitchen is sitting across the local road, all in plain sight the cook looked like she had ten arms darting left and right preparing the orders. 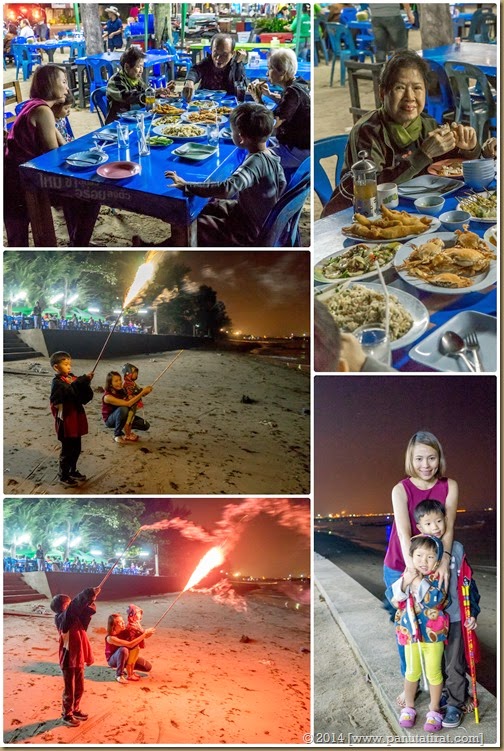 My mother went from being a slumber snail to a rabbit on ten cans of redbull, lol, it was so great to see her back to life again, and all thanks to the freshly prepared crabs... haa haa haa. The mood of our team picked up considerably, I think everyone was just tired from a very long drive and all the activities, but sitting here all around a mountain of food seemed to bring everyone back to life.

Suddenly there was a ‘Bang... pppheeeewwwww... Bang...’ of course this being the last few hours of 2014 fire works was flying left and right. A young lady was selling some handheld fireworks... suddenly eating became your second agenda, lol.

To be honest I was looking forward to have a go too, so with some spare change in hands we bought you two each, one of those handheld shooting fireworks stick, haa haa haa. I was a bit apprehensive at first, it was just a thin couple of feet cardboard tube all wrapped up in colourful graphics. At first I didn’t even know where to light the darn thing, haa haa haa. Luckily a mother of another group showed me how, and thus avoiding some disaster front page news, lol.

It was more fun than I had expected, and ended up getting you two a couple more of each, haa haa haa. Dinner came and went, everyone was all smiles and that is the best way to end 2014, there was no chance that anyone of us was going to be awake to see in the New Year, snoring was definitely on everyone’s agenda.

We were a little lost on what to do on the second day, but the previous night before we’d left the restaurant my father asked the owner if there was another famous temple near by, of course this being Thailand it wasn’t difficult for him to suggest a temple we should visit. 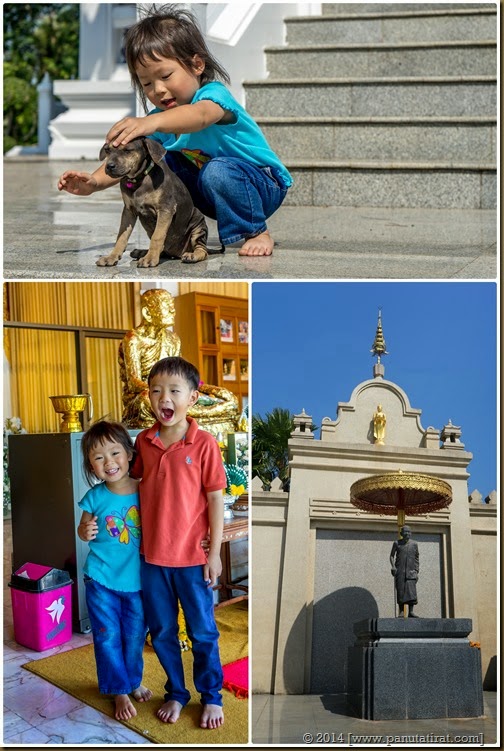 Morning’s breakfast was a simple affair, after reading all the reviews I was dreading it, but as it turned out it wasn’t as bad as we had expected, trust me we’ve had much worse, haa haa haa. Checking out was also surprisingly painless, and soon we were off again to Wat Wang Wa.

Going to Wat Wang Wa meant driving even further away from BKK, but the journey was not that painful, the roads were great, and I had a bunch of movie for you two to watch, lol.

We could tell Wat Wang Wa must have been very popular with the local, the grounds were huge and extremely well kept. After spoken to the local this temple will be full to the brim during the Chinese New Year, and definitely one of the most respected in the area. I could tell that my father was happy to have been able to pay homage here, and that made the long drive more than worthwhile.

Mar was more excited with the horse that was tied up in the car park, don’t ask me where there was a horse in the middle of an empty car park, it was just chilling until Mar came along, haa haa haa. There was also a puppy that couldn’t escape Mar’s grasp, lol.

After an hour or so it was time for the long drive home, for lunch we were going to drive back to the place we had supper the night before, but that really would meant quite a detour, so like digging a rabbit out of a tophat, your mother managed to find another restaurant not too far away.

We were so lucky, Kruo Par (Kitchen Auntie) was packed, lucky for us I think we took the last available table, similar to the most local restaurants, this place was nothing more than a roof over a piece of beach. These local restaurants really doesn’t disappoint, it may not look much from the outside, but boy the quality of food it delivers for that price point it is hard to beat.

The drive home was totally uneventful, and of course that is the way it should be, lol. As soon as everything had been unpacked and you two were fast in slumberland, I was already thinking where all of us could go next.