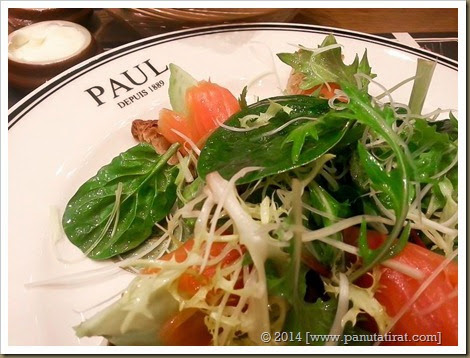 My memory is like a sieve at the moment, but I think I’d returned to True in August of 2013, so it has been around 14 months up to now… and it has been one long slog for the team, but as of October 15th, we’d managed to give birth to Paul Bakery Restaurant - Thailand, haa haa haa.

Not enough thank you can be offered to the team, to True, to CP as well as to all of our partners and outsource, the whole project from the signature to 1st dish served was slightly less than 11 months.

This is only the beginning, one can have the most beautiful kite, but without the right skill and focus and dedication (plus a little bit of luck) a kite is just a piece paper on a couple of sticks, instead of a majestic almost magical flying thing, haa haa haa. So our attention turns to operations, and so far the team has been fantastic, the only real hiccup we had was due to the POS system, unluckily this is also the heart of the operation… haa haa haa, but things are improving… one day it will be as smooth as both of your bottoms, lol.

During the 11 months, it was like building a huge ship in the dock on dry land and under cover, it was hard work and nerve wrecking but it was straight forward (somewhat), now the ship has been put to sea and it has been battered with wave after wave, bad weather as well as sunny sky will be undoubtedly take turn, but I think we have the right crew to take us through thick or thin… this is only the beginning :-) Ahoy here we come… haa haa haa.