There we were on Friday May 23rd, I was up as the clock turned 04:00, and actually that was a bit of an overkill, especially when we had already packed most of the stuff the previous night (saying that it was only a few hours ago, haa haa haa). Not long after your mother was up and about, to finish the packing. Getting you two up was a bit of a pain though, talking about groggy to the n-th degree. 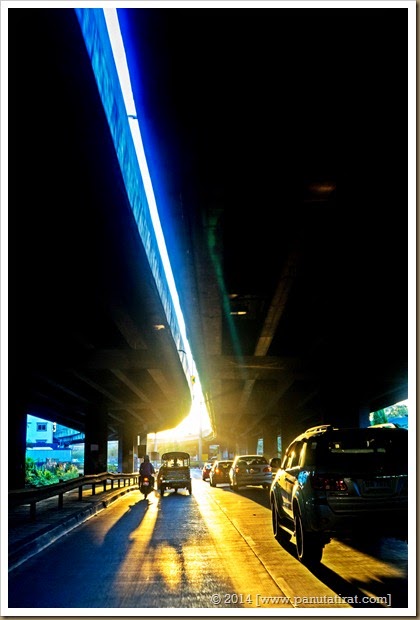 By some miracle we were on schedule and the wheels managed to turn at six sharp, only forty five minutes later we were parked at Suvarnabhumi airport. Things could not have gone smoother. The checking in took less than five minutes, so my only worry was where to have breakfast, haa haa haa. McDonald came to the rescue, their breakfast set was a winner with Mar (and me too).

So far my only mistake was not booking the windows seats for you two, but all in all Matt wasn't that too excited with flying, he was more interested in all the buttons on his seat, turning light on and off and calling over the flight attendance was more fun than looking at all the fluffy clouds... haa haa haa. Mar on the other hand was adamant on walking to every nook and cranny on the plane and when we were successful in convincing her to sit, she kept kicking the chair in front... wow what a fun time for your mother and I... haa haa haa.

The plane took off around 8:30, and we landed in Phuket around 09:30, the next port of call was Avis, the paperwork was done fast enough, but we ended up having to wait for a few minutes before the car arrives, I could see you two slowly melting away in the searing heat. It was not the newest of car, but it serves our purpose of plodding around Phuket and a drive up to Phang-na quite well. Paying extra for a baby seat was worth every THB, haa haa haa. Soon we were humming along twisty roads of Phuket, our base (hotel) was in Patong, one of the most popular (touristy) places (forty minutes south of the airport). 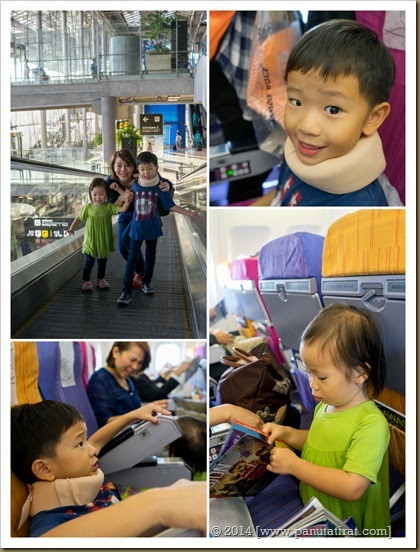 Your mother used our air-miles for the hotel, then paid extra to upgrade to a family room (at Mercure Patong), unfortunately the family room smelt literally like a troll's cave, so we began to search for a window to open and there were plenty of windows, but all of them were screwed shut... The original  plan was just to drop off the bags and head off for lunch, but unfortunately after you two had discovered the bunk beds, meant another ten minutes spent watching you two climb up and down the bunk beds, and in the words of Yoda, 'entertaining it was not'.

However the longer we spent in the room to more bothered we (your mother and I) were, upon a closer inspection we suspected that the last time someone stayed in this room, the dinosaurs were still roaming the south of Thailand. So by the time you two had enough of climbing, your mother and I have also had enough of the room, and a request was put in for another.

The hotel did manage to find us another room (with tiny extra cost on top of the upgrade), but we couldn't see the room as it was already quite late for lunch. Lunch was quick and uneventful, with nothing planned we headed back to the hotel for an afternoon swim, and to our relief the new room was fantastic. 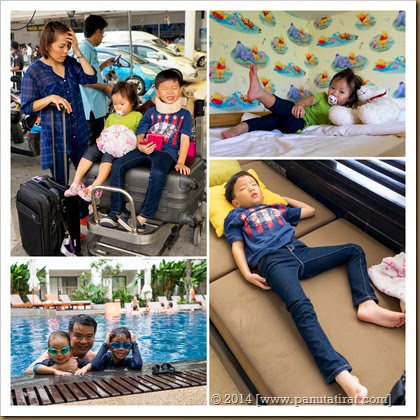 I was amazed by the both of you, Matt looked much stronger in the water now, and I was totally blown away by Mar's ability to bobble along by herself, going under for a few millisecond before popping back up and pouting for air (totally adorable), then with a smile gone under again. I was in panic mode for a bit but Mar was absolutely loving it... haa haa haa.

In a blink of an eye it was time for dinner, well attempted dinner, haa haa haa haa haa haa. The restaurant your mother wanted to go to was only 25 minutes away... 15 minutes before reaching our destination Mar was fast asleep, so I asked Matt if he was sleepy, the answer was a definitive "no, Papa" and within a hair breadth away from the restaurant Matt decided to follow his sister into dreamland... Haa haa haa haa haa, trust me your mother and I had a long debate whether to wake you two up, but since the both of you were up since 5-ish am we decided to head back, hungry and tired. That night we had quite a good pizza and a beer each... What bliss.