Matt's neck was much better, and Mar was full of energy, so your mother and I were adamant that today was going to be your day, so that meant nothing but sun, sea, sand and pool... haa haa haa, and with hindsight the mission was totally successful. 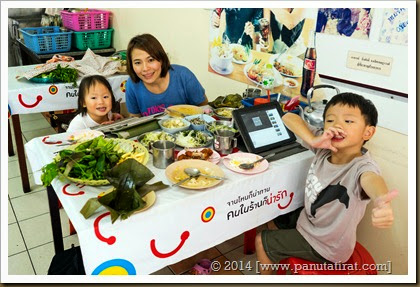 On this morning we decided to skip the hotel’s breakfast and look for something that a local would eat. The local eats Khanom Jeen (Thai fresh rice noodles) with various sauces (mostly curry) for breakfast. Your mother’s friend recommended a famous one which is again all the way across the island, so off we went. Finding the place was not too hard, although the information on G-map was slightly off (by about a hundred metre).

After breakfast instead of going to some faraway beach, we decided to find a quiet place along Patong beach, and we certainly did, all complete with a shower facility… great!!! The deck chairs were 100 THB each, and the staff there was more than helpful to put up as many beach umbrellas as you two needed.

The beach was virtually empty, the sun was strong as were the waves. Matt loved the waves much to your mother’s despair, haa haa haa. Mar followed Matt into the sea, once… and once only haa haa haa, she was contented with digging holes in the sand and endlessly demanding me to fetch her bucket after bucket of sea water to fill in the hole. As you know filling a sandy hole with seawater was as pointless as trying to sell ice to the Eskimos… After what felt like the 100th bucket, I gave up… then your mother took over the role of fetching seawater... haa haa haa. 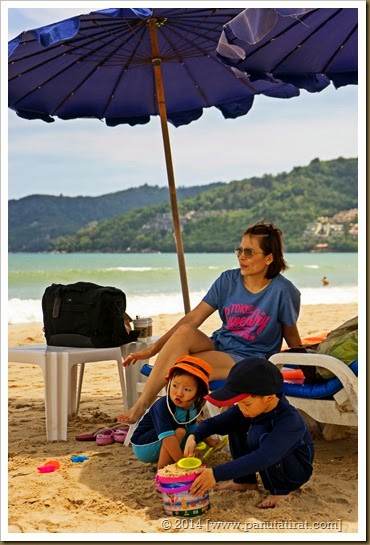 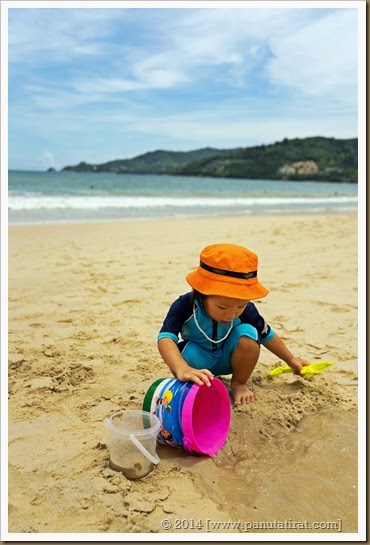 Just as when we decided to leave, the sky closed and rain poured, talking about perfect timing, the  two hours we’d spent under a searing sun was more than enough, again lunch came late. After lunch it was back to the hotel for a quick rest, followed by a vigorous afternoon swim in the pool. At the end of the day, by the time we were heading out for supper, I was definitely a perfect representation of a prune. Instead of finding a local restaurant we decided to take an easy way out (MK) and headed to Jungceylon (huge open air shopping centre).

On our drive back it was obvious that all the exercise had totally worn you out, your mother and I tried our best to keep you two awake on the count that you have not brushed your teeth... haa haa haa haa haa, our effort was futile, lol.