John and Tutti were in town :-)

John was (yesterday) back in BKK again, this time we were very lucky because Tutti (John’s better half, and what a lucky man he is) was with him on this short break from Bahrain. 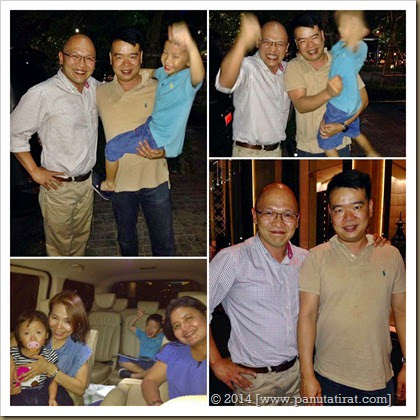 I think I must have caught up with him a couple of times when he was in town back in 2013, so when he said he was going to be here again with Tuttie (whom I have never met), unless pigs were flying over a piece of frozen hell, there was no way we weren’t going to meet (I think this is a double negative sentence, lol).

For your background, at Wellington we were all in the same dorm in Darks, there was Chris, Rob, Paul, John, Matt, Rahma, Gavin, James and yours truly, then there was Ashley whom I think was a day boy but became a border for a while (Ashley’s character alone could carry a whole Hollywood film).

As you know, you don’t have any uncles or aunties (from my side), obviously because I don’t have any brothers or sisters, and these guys were/are pretty much the closest thing I have to a brother, lol. I am lucky to be able to say, time in Wellington was absolutely fantastic, 5 years of mostly ups and hardly any downs… haa haa haa.

John asked if you two were going to join us for supper, so I gave him a fair warning… haa haa haa haa, only kidding, apart from Matt being slightly overtly excited (for the whole 3 hours, then collapse into a snoring monster as soon as we were back in the van) the get together was fantastic, although why I’d brought them to a European restaurant rather than a Thai restaurant is still beyond me.

We hope they’ll be back again soon :-) which I think that could be quite soon because Tutti has her heart set on visiting the ‘James Bond’s’ island, because she saw it on a music video, haa haa haa, to which John thought it was in Huahin, well he was only about 600 Kms off, haa haa haa haa haa.

We were old men, giggling like young boys… lol, nothing has changed, apart from that we now drink G&T and Mojitos rather than Snake Bite and Black… :-)