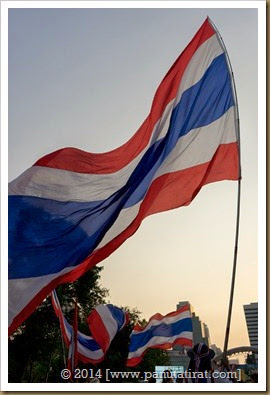 ‘Shut down Bangkok’ by the protestors opposing the current government have some what calmed down a little, after blocking off some of the key road intersections for a few weeks, they have now all joined up and essentially taken over the main park in Bangkok, Suan Lum.

We visited Suan Lum for our usual ‘boat in the lake and feed the fish’ time, and so it was kind of inevitable that we would run into the protestors, I wasn’t surprise by the size of the gathering, but I was truly sadden by the effect of having so many people camping in the park, it is a huge park (by Bangkok’s standard), and I think most of the grass had already died, people were smoking and the litter was clearly building up, but I am guessing for many people the cause is worthwhile enough to ruin the bushes, grass, trees and whatever wildlife (I am not talking about a safari here, haa haa haa) there is.

Personally I feel the pressure on the government had totally disappeared since they have retreated into Suan Lum, apparently they are waiting for something, so some inner circle people kept saying… Well I truly hope they won’t have to wait for long, otherwise they may just as well pull up all the trees and pave the whole once ‘blooming’ park for I am sure there won’t be much left if things kept going like this, what a shame, all in the name of politics, and at the end the real people who will gain from this, certainly won’t be the people who walk on the streets. Because at the end of the day, crappy people will eventually find their way back into power, unless the weakness in Thailand’s democracy is dealt with, to have the majority of the population educated enough to make the right choice and put their Xs in the right box, so that for once, this great country of ours gets a person worthy enough to be her PM just like she deserves. I’d wished they’d kept their focus on the streets. 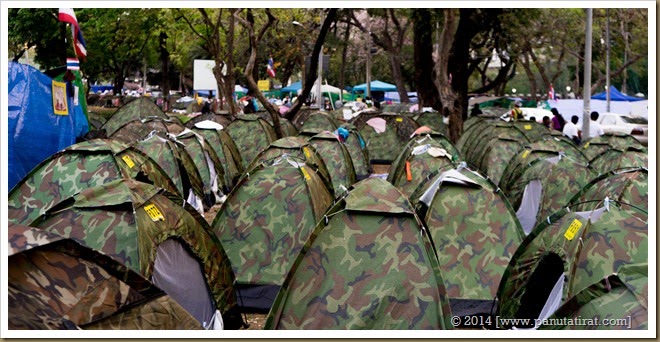 Email ThisBlogThis!Share to TwitterShare to FacebookShare to Pinterest
by Panu at 00:48
Labels: Lumpinee Park, Protestors, Shut Down Bangkok, What a shame