Swimming in the Fog :)

Well, not really swimming in the fog, the lens got steamed up coming from the cold and into the searing heat. Many months ago your mother used the mileage points that were going to be expired to redeem a couple of nights in a hotel, knowing fully how you two enjoy exploring new environment, and she decided to use it this past weekend.

We ended up at Novotel (Ploenchit), which is literally 10 minutes drive from our house, haa haa haa, but for you two the excitement level was like we were going to the moon, haa haa haa.

Anyway, we’d checked in late on a Saturday afternoon, and you two decided not to leave the hotel ever... haa haa haa, dragging you two out for dinner was like pulling chewing gum from someone’s flowing locks :) you two couldn’t wait to get back. 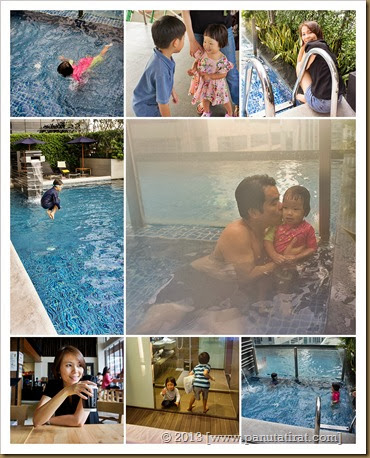 Getting you two into sleeping mode was most challenging, but eventually time took toll on your energy bar, and soon after nine you were soundly asleep. I’d then popped back home to get my ID which was needed during check in but I’d forgotten the whole wallet at home (your mother was not amused).

Sunday started with a quick breakfast then swimming in, what seems to me, the coldest swimming pool in the world... haa haa haa. Mar spent most of the time with her head under water, struggling for a few un-coordinated strokes then pop up for air, and she did this for the whole hour :)

In the mean time Matt was jumping left and right into the pool, when Gio told him there was no jumping and for Matt to read the sign, he quietly disappeared to come back a second later, saying he did nothing wrong because the sign said ‘no diving’ and he wasn’t diving but jumping... haa haa haa, one - nil to Matt… :)

In about an hour Matt was visibly shaking and Mar’s lips were turning blue :) it was obvious that it was time to leave the pool, by the time we got back to the room Mar’s hands were turning green, so we wrapped her up in about 10 blankets and gave her some milk, not long after she felt asleep :) 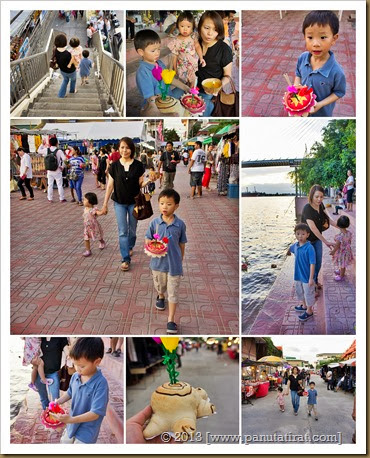 A couple of hours later the two of you wanted to have lunch in the hotel, but the choices were just a little bit limited, so we’d decided to take a short ride on the Skytrain to Terminal 21, it was fun to see you two all excited on the train... nice people gave up their seats for you two :) but of course we had to decline because you two were not in a sitting mood.

After our extended lunch we once again took the train back to the hotel to hang out for a while. When it was time to check out, Matt was not a happy chappy, tears were welling up, after we’d promised to come back, Matt was back to his old self, while at the same time Mar just didn’t give a to## :) After checking out around five, and on our drive home, your mother decided to visit a temple to ‘Loy Kratong’ (which obviously was happening on that very Sunday).

We decided to go to the temple not too far from home, and most importantly it was next to the Chao Phraya river, we had to pretty much rushed through the whole thing, as my parents were waiting at home. It was really fun although our ‘floating the Kratong’ skills were very much lacking… lol, Matt’s Kratong toppled over and my turtle Kratong was just going no where fast :) We promised ourselves next time we are going to spend at least a couple or hours here. Loy Kratong festival is not just about floating the Kratong, it is about a very old Thai tradition with the local market and the Thai style funfair… and we didn’t have time to enjoy any of those… I think your mother and I were more disappointed than you two.

That weekend turned out to be quite exciting for all of us, and to see you two so excited was worth all the trouble, we are definitely going to do this again. (This post had been sitting in my Google Drive for ages… so the timing may feel a little off).