We were not expecting this, you were chosen as one of the main lead in your end of year play, there are four classes doing four separate plays, but each story was linked through a set of ‘postman’ characters (running and joining each story, woven them into one (kind of)). 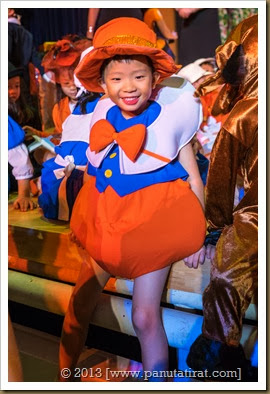 Everything ended with Father Christmas (well, no twist here, it’s being Christmas time now)… haa haa haa. Anyway, your class did an alternative version of Humpty Dumpty, and here is a quick synopsis. Humpty Dumpty (‘HD’) was in a hospital surrounded by handsome King’s horses and King’s men (it was reveled that he had just been put back together). While recovering, HD receives a present (from the Postman), opens is up and there was a Jigsaw in side (here is a play between the ‘Jigsaw’ and HD, as HD was also broken into little pieces), HD was so excited he felt off his chair and broke into little pieces again!

You were Humpty Dumpty, and you have no idea how worried your mother had been for the past couple of weeks… I think she knew the script better than you, all of your friends and your teachers put together… haa haa haa haa haa. Let just say we practiced a lot, at first I never thought you would have remembered all your lines… and you have say them while acting as well… wow, we were and are very proud of you Matt :)

Must also give special mention to the wardrobe department, absolutely gorgeous… You look like an egg with two chop sticks for legs, haa haa haa, perfect. I didn’t take any photo during you and your friends’ performance but had opted for a video instead, luckily all the parents were given opportunities to take photos of their child / children after the show, just as well because if they were not allowed a small riot would have been started right there and then and I don’t think even the police with tear gas could have stopped us :) 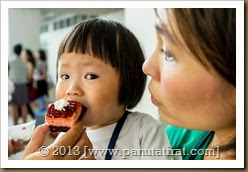 We had also decided to let Mar play truant, luckily your auntie was there to help out, by the way Mar was also loving it, especially the cakes after the show, hee hee hee.

I am sorry for not being able to post any pictures of you together with your friends, as I don’t think it would be right without their parents permission.