Here is another one of those post that have been fermenting in Google Drive for months :) …This was a school assignment, where each week you and your friends took turn to take Barnaby Bear home, the assignment is to write a few sentences on what interesting things you did with Barnaby, then take a few pictures and stick them in Barnaby’s book. 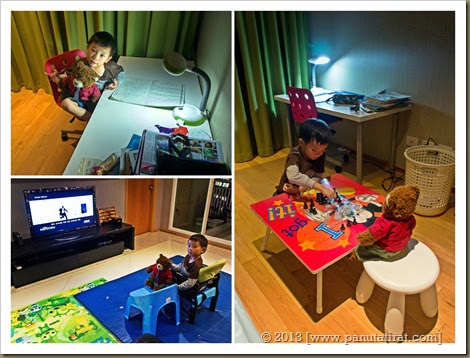 Looking at the book it looks like you were the fourth person to have taken Barnaby home. You really surprised me on this one, as you seemed to have everything completely planned out in your head.

Straight away you wrote down that you’d played games, watched TV and finally Barnaby helped you to do your homework. You were so excited and rushed through the writing part in no time, unfortunately your mother didn’t think much of your handwriting, all the letters were uneven and different in size.

There was no way your mother was going to let you submit that to Ms. Granger, so true to her commitment to quality, she made you rub out the whole lot and start again. Wow, you made such a fuss, actually more than just a fuss, tears were flowing... but at the end, like as always, your mother won, haa haa haa, welcome to my world baby, eei eei eei :)

Then came the fun part, you and I discussed the photos and how we were going to do it. For ‘game’ you wanted to have a photo of Barnaby and you playing Bingo, but after looking around your room it was going to be more interesting to set up the chess board scenario instead, I think you went along with this idea because you are now learning how to play chess at school.

For the second photo, watching TV was simple, a couple of chairs in front of the TV was pretty much it. The third was a little bit more challenging, how to set up Barnaby Bear so that he is helping you to do your homework?

At the end it was just you holding him while both of you looked at the camera, with your homework book laying open on your little table.

Of course we took more than just three photos, it was more like 30 photos, from various position, angle and height :) You chose the final three photos for me to do some ‘lightroom’ work on them. You were ever so excited when the printer was printing, oh, the smile on your face when you saw the final photos was better than getting royal straight flush while everyone got four of a kind :)