Through Google+'s feed, I’d come across a two minute video called “Dear Mr. Watterson”, a documentary on the comic strip ‘Calvin and Hobbes’ and their creator (Mr. Watterson).

There are two comic strips that I can not recommend to you two enough, ‘Calvin & Hobbes’ and ‘The Far Side’, these two will definitely still be around (as in not forgotten) when you are old enough to appreciate them, and I hope you’ll like them as much as I do (the Far Side: Inconvenience Stores is one of my personal favourite :) Anyway, can not wait to see the documentary. 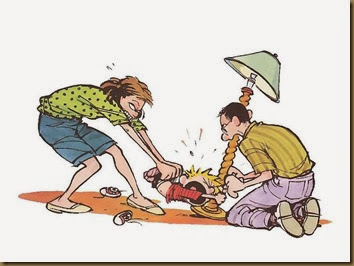 Of course, reading Calvin & Hobbes is just like eating salt & vinegar crisps, one is never enough, in fact one hundred is not even enough and only a heart attack could stop you :) So after seeing the trailer of ‘Dear Mr. Watterson’, I must have spent the next 20 minutes jumping from strip to strip, then I came across this one.

This is literally how we are with Mar when she is in one of her ‘no shower’ mood, haa haa haa. You would have thought getting a shirt off an almost 2 year old little girl would be easy… as easy as kicking a heroine addiction.

Honestly sometimes I think I was wrestling with the mini Incredible Hulk :) her grip would put The Terminator’s to shame, lol. And the scream… wow… the scream was earth shattering, but the most painful thing of all was her stare… sad enough to melt the Snow Queen’s heart. Your mother have devised a couple of cunning plans… plan A was to entice you into having a shower using a small carton of orange juice… so I now have many pictures of you all soapy in the shower, holding and drinking a small carton or orange juice with a straw (don’t forget to come and ask me to show them to you two).

Plan B was simply to fill up a baby bath and let you play with it in the shower, but this doesn’t always work, it was only effective when Matt was just about to have a shower too.

So please go out and look for these two classic comic strip, and while you are there don’t forget to search for ‘Doraemon’ and ‘Cobra’ too (these are Japanese comics, may be you should wait until you are about 18 to read ‘Cobra’, haa haa haa), I promise they will grip you harder than Mar’s grip on her tiny t-shirt when she didn’t want the shower :)
Email ThisBlogThis!Share to TwitterShare to FacebookShare to Pinterest
by Panu at 23:46
Labels: Calvin & Hobbes, Comic, Family, Family Life, Marcella, Matthias, Panop, Pasuree, The Far Side