I have only heard of this scam (through TV and the Press) but have never faced one myself, until today :) The call was quite convincing, and it didn't click until about 2 minutes into the conversation that I was being conned.

It all started with an automated message saying that my bank accounts have been suspended pending investigations, then you were directed to press a number to go through to this call centre. 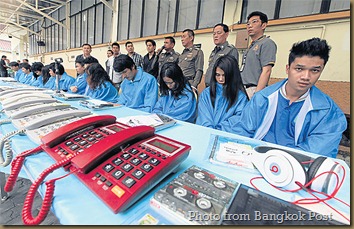 She began by introducing herself (full name) with an over emphasis that she was calling from the HQ of this Bank (name withheld) (she had mentioned this about three times). Then she began her well rehearsed lines, by asking if I had received the document that was sent to me regarding 'all' my bank accounts being suspended, of course I said 'No'.

She then apologised then excused herself to check with her 'system', after a short pause she came back asking for my name and that all my bank accounts were going to be suspended. Of course I'd asked why, and it was because somehow a bank account have been opened in my name in one of their far away branch, and it has over 1.2 million THB in it, because of this I am now a suspect in being involved in a money laundering scheme (this was when the penny dropped).

She asked me to hold the line while she transfer my call to the 'Crime suspension department at the national police headquarter', really... :) I'd wished I'd had time to play along to the end but unfortunately I had to go back to work, shame, shame... :)

So I'd posted the number that was shown on my mobile to FB, just to let the rest of the gang know and be aware of this particular mobile number... They were really convincing when I was on the call, but with hindsight there were loads of small things that were not apparent at the time of call. It should have clicked much sooner especially when they didn't know my name at the start. Because they should have lots of information, especially when she'd pretended to be calling from the bank, so naturally they should have all of my information including my underwear size, lol.

Email ThisBlogThis!Share to TwitterShare to FacebookShare to Pinterest
by Panu at 21:46
Labels: Call Centre Scam, Interesting