Just by luck, the day before we flew home was the day of ‘Pride in London’, for the LGBT community, actually it was for everyone, I mean you don’t have to be LGBT to enjoy yourself :) on that day :)

In the very early morning (jet lag) we noticed that the cars were very light on the street, and by late morning there were no cars at all and at the same time barricades were going up every where. I’d thought the Queen was going to drive through or something…

Haa haa haa, in way I wasn’t wrong :) a Queen was there alright, it just wasn’t HRH Queen Elizabeth, I think her name was Bob, lol, in fact there were about a billion Queen there :) and they were all fantastically fabulous. 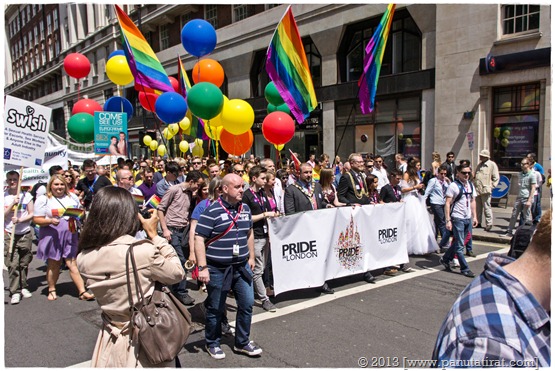 It was ashamed I had to rush back to the hotel (I ended up chucking up chunks all afternoon, you’ve got to love food poisoning), but on my way back I’d come across the very beginning of the procession, somehow I’d managed to tell all of my orifices to stay shut and whipped out the camera (what did you think I was going to whip out? lol) took a few pictures and then did a Usain Bolt across the park to the hotel, talking about just in time delivery.

I’d woken up again at around three in the afternoon for a final round of involuntary-regurgitation, my head was clearing and really wanted to go out to enjoy what was left of the day, because living in South East Asia we only get to see this on the TV, it was a boon that our trip coincides with this event. The mind wanted to go, but the stomach and the legs were not having any of it, and twisted my arm to stay put in bed… Probably it was for the best, can’t imagine having to run around looking for the loo with so many people around :)