It has been a while, at least their renovation looks great in the Emergency section :)

The evening started great, I'd came home around eight-ish but the both of you were still awake, so we played around until your mother got a little miffed, cue for me to take stage right and exit :) 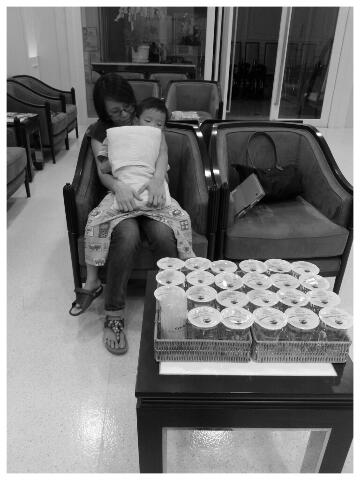 Suddenly just a little before midnight Matt started crying and clutching his right ear, usually Matt is a sound sleeper so your mother was extra worried that the pain was strong enough to have woken him up. The pain seems to come in waves, the decision to visit the hospital came pretty much straight away (as it is only down the road, and when it comes to eyes and ears you don’t mess about, the spare just doesn’t come off the shelf).

The well practiced routine was running smoother than a BMW inline six, call the hospital, call your auntie (someone needs to be here with Marcella), get dress and in a few minutes we were off.

There were already a few people in the emergency room, although no blood was gushing nor were there any eyeballs on the floor, another pretty quiet night. The Dr. came for Matt soon enough… ears looked fine, nose was very blocked, temperature was rising but still normal… etc, etc, etc.

For the past few days Matt has been suffering from a bout of cold, nothing serious just a runny nose, and that was the Dr.’s diagnostic, the pressure from the blocked up nose was causing a lot of pressure in the ear and that was the cause of the earache. So quickest solution was to get rid of the blocked up nose, for that she gave us Ilildin (and others), and a couple of drops later you were sound asleep…

Annoyingly we had to wait for over 30 minutes just to get the meds., and trust me there was no queue at one in the morning. About 15 minutes in a staff came to inform us that the computer system was down and they could not key in anything… After about 30 minutes I’ve just had enough, Matt was squirming in pain and all I wanted was the meds.

This morning Matt’s temperature was a little high, so no Robotics class today, bed, bed, bed, lunch and more bed. If Matt’s temp. goes down we may just take him to see Despicable Me 2 though :)

Email ThisBlogThis!Share to TwitterShare to FacebookShare to Pinterest
by Panu at 08:15
Labels: Baby, Hospital, Matthias, Panop