We've been to Asiatique a couple of times now, and on both occasions we’ve managed to miss out on the Ferris wheel ride... ‘the queue was too long’, ‘it was getting late’ and so on. Matt was pretty upset that twice he wasn't able to go on the ride, and so we promised him that next time, the first thing we would do was to go up the Ferris Wheel before we do anything else, lol.

Today (16th) everything was running a bit late, lunch didn't happen until way gone one, so it was natural to skip March's Gymboree class and find something fun to do. By two o’clock-ish we were scratching our heads, your mother mentioned Asiatique and an old debt came to mind :)

At 15:00 Asiatique was just stirring and not everything was open, it is more of a night bazaar kind of a place. After talking to some staff by the Ferris wheel, we shall have to come back in about an hour when they open. After a quick walkabout, a coffee, and two huge pieces of cake later, we headed back to the Ferris wheel. 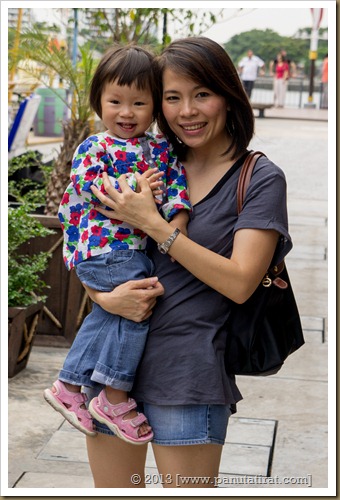 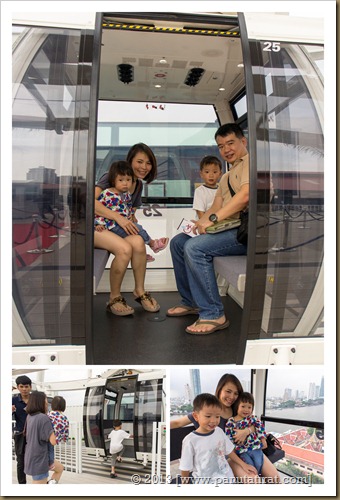 Matt was giddy with anticipation :) Marcella was just going along for the ride so to speak, haa haa haa (250 THB for adult and 150 for children). Their operation was very professional, they took care of the pram and soon we were ushered into an air conditioned pod (does one call it a pod?).

I think it went for about 6 cycles, and we enjoyed every seconds of it, there was also a pause during one of the cycle for us to enjoy the view.

After the ride we took a walk around the place and it was obvious that you two were feeling the full effect of the heat, so we took a short break for some cold drinks, then Matt decided he wanted a boat ride, there was a 10 minutes free boat service from Asiatique to Sathorn port. 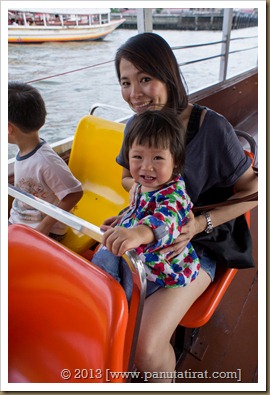 As it turned out, the easiest solution won, all of us took the boat there and back... haa haa haa, March was extra quiet (her first time on river boat), Matt was a little miffed that the boat was going so slowly, lol.

It was a pretty fun filled afternoon, luckily the rain managed to hold up, the searing hot sun was blocked by the overcast sky, the wind was light and breezy, but the humidity was something of a challenge for the both of you :)